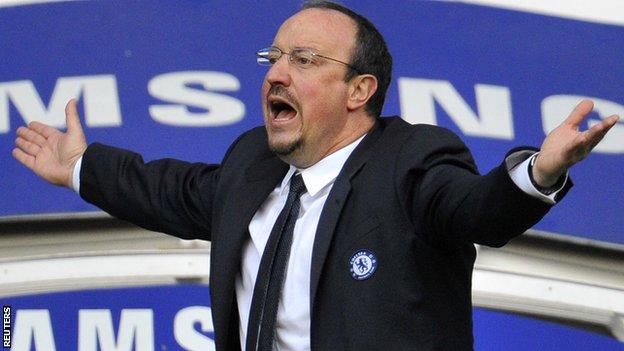 The Spaniard and some unveiled anti-Benitez banners on Saturday.

There were also chants against the ex-Liverpool boss but he did not face the serious hostility some had anticipated.

"The fans were behind the team and the atmosphere inside the stadium was really good," he said.

Following the midweek FA Cup win at Middlesbrough, Benitez had reacted angrily to criticism from travelling Chelsea supporters fiercely opposed to his appointment - supporters were "wasting their time" in protesting against him, he said, and he suggested their actions could cost the club a top-four place.

And in their first game since those comments, Chelsea fans produced banners opposing Benitez and chanted against the Spaniard while calling for Jose Mourinho's return during the 1-0 win at Stamford Bridge.

Banners were dotted around Stamford Bridge reading "The Interim One" - a clear reference to "The Special One" Mourinho - and "Never Wanted. Rafa Out", but Benitez shrugged off the dissenting voices.

"We played some very good football and the atmosphere was good," said Benitez. "I was really pleased the fans were behind the team and really pleased because the players played with a lot more confidence.

"It was all very, very good and very, positive."

Benitez, who refused to comment on his midweek quotes, repeated his insistence that he will stay until the end of the season, saying: "I have a contract until then.

"We still have 10 games to go. It is a long race but we are in a good position and we have confidence we can finish in the top four.

"I am a professional. I have passion for football and I like to prepare for the games and compete. I enjoy my job as a manager trying to win games every week and this game was fantastic."

The former Inter Milan boss felt his side were worthy winners against the Baggies: "We had a lot of chances - for about 75 minutes we were creating chances and controlling the game. It's a pity we couldn't have score the second.

"The man of the match was the keeper [Ben Foster]. I'm pleased with the performance and pleased the crowd were behind the team.

"There were a lot of positives. We could have scored three or four."