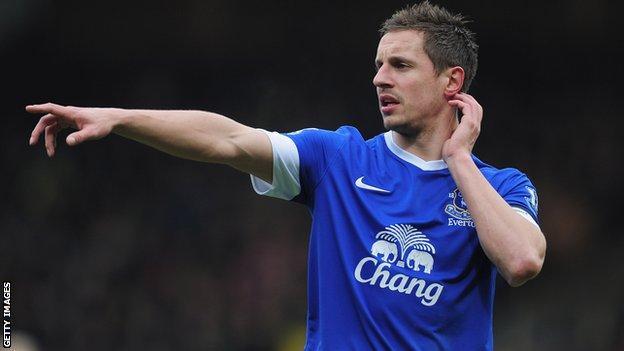 Everton defender Phil Jagielka is to undergo surgery on a damaged ankle which could rule him out England's forthcoming World Cup qualifiers.

Jagielka was replaced just five minutes into his club's 3-1 win over Reading on Saturday after a challenge by Adam Le Fondre which earned him a booking.

"It's a bad one, he's going to have surgery to stitch it up," Toffees boss David Moyes told BBC Sport.

Le Fondre tweeted after the match that he had apologised to Jagielka.

Moyes did not reveal how long he expected Jagielka to be out for.

But the 30-year-old is almost certainly likely to miss Everton's FA Cup quarter-final tie at home to Wigan on 9 March.

Jagielka has been a key player during Everton's push to qualify for a European place.

He has been an ever-present for the Toffees in the Premier League this season.

Asked about Le Fondre's challenge, Moyes added: "At the time I thought it was poor.

"I've genuinely not seen the challenge again. Maybe if I see it again I will think differently.

"I'm disappointed because Jags is such a good player."

Le Fondre tweeted he had apologised to Jagielka after the match.

He wrote: "Fans were brilliant today. Shame about result. Everton were class. Thoughts with Jags. Never meant to catch him. Caught him late and apologised."