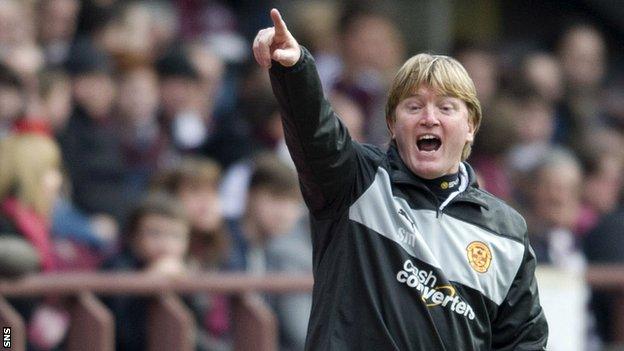 The Steelmen recorded a 2-1 victory at Tynecastle to stay second in the table.

"This time last week I was probably the lowest I'd been for a long time after a poor, poor performance up at Ross County," McCall told BBC Radio Scotland.

"Yet now we've had back-to-back victories. We'll use that word 'bouncebackability' if you like!"

And he added: "Football's a great game but it's got highs and lows."

Michael Higdon's 18th goal of the season and Dylan McGowan's own goal gave Motherwell a 2-0 lead within eight minutes.

John Sutton put Hearts back in the game on the hour-mark.

"Hearts brought their experienced players back and if they got one goal they were always going to push for the second," McCall said.

"It's always a close game between us and Hearts and in the end we hung on for the three points.

"There's different ways to win games and today it was a bit of grit and determination.

"I thought the two young centre-backs, up against Michael Ngoo and John Sutton, battled manfully and did a terrific job for us."