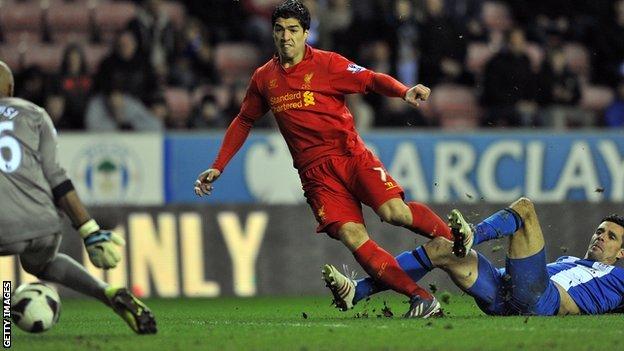 Wigan boss Roberto Martinez was happy with the on-field altercation between two of his players because it showed their "passion".

Emmerson Boyce and James McArthur had to be separated by captain Gary Caldwell in the 4-0 loss to Liverpool.

BBC Sport's Alan Hansen called the players' attitude "appalling", but Martinez refused to criticise his side.

"If I'm honest, I was glad to see that because in the position we are in we need passion," said Martinez.

"We can't have players who accept defeat and go through the motions.

"It was a moment of frustration between the players who had the feeling we had thrown away the opportunity to win three points.

"The reaction from James and Emmerson is something I want to see in the dressing room.

"I think they were demanding a little more from each other and then it became a little argument.

"If everyone could have that passion, we would have been a lot more competitive than we were in the first 20 minutes.

"At half-time there was a lot of respect between the two players, who analysed their frustration and used it in a good manner to perform better in the second half."

However, BBC Match of the Day pundit Hansen criticised the players for a result that left Wigan only above the relegation zone on goal difference.

"The attitude of one or two of the Wigan players was appalling - and that's big trouble for Martinez," said Hansen.

"There was a coming together and it's not good for team spirit. When you're at the bottom of the table you need to be all together."

Wigan have 10 games remaining but were bottom at the same stage of 2011-12 yet still avoided relegation as they won five of their last six matches.

"Every game is very important and we need to be perfect from now on," said the Wigan boss.