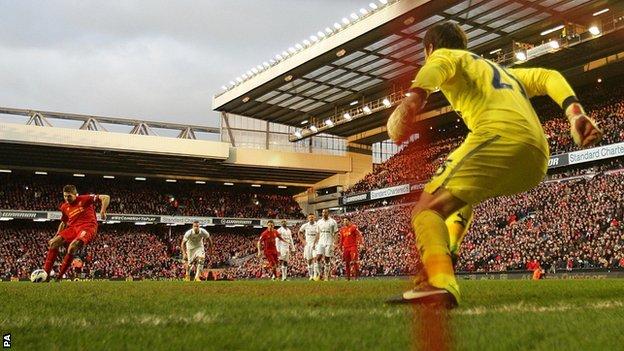 The Reds went ahead when Luis Suarez stabbed in after a slick move.

Spurs hit back through a Jan Vertonghen header and the Belgian then fired the visitors in front with a 15-yard shot.

But a poor Kyle Walker backpass allowed Stewart Downing to drive in a Reds leveller before Steven Gerrard netted the winner with a spot-kick after Benoit Assou-Ekotto fouled Suarez.

Spurs were authors of their own downfall as two late defensive mistakes contributed to their first defeat in 13 league games.

The White Hart Lane club stay third but this result will give the teams below them - including north London rivals Arsenal - hope that Andre Villas-Boas's side can be caught, especially given the way they faded towards the end of last season.

Spurs endured a spell of just six points from a possible 27 during last year's run-in, which ultimately cost them a Champions League place.

For Liverpool, this was a first victory of the season over a team currently in the top eight and lifts them to sixth, but they remain outsiders for a top-four spot. They are seven points behind fourth-placed Chelsea, who also have a game in hand on the Merseysiders.

"A tremendous game. Tottenham shot themselves in the foot. Liverpool have beaten one of the big teams for the first time this season and they are above Everton."

The Reds are the Premier League's leading scorers since the turn of the year with 25 goals and they quickly got into the attacking mode that has become a feature of their recent performances.

It was the home side who exerted the pressure in the opening stages, although a dipping 30-yard Gareth Bale free-kick was nervously swatted away by Reds keeper Brad Jones, playing in place of the injured Pepe Reina.

Liverpool's high work-rate and fluid movement stretched Spurs and the hosts duly took the lead with a well-worked goal.

Coutinho produced some lovely skill on the left wing before combining with marauding left-back Jose Enrique, who slipped a pass through for Suarez to stab neatly inside Lloris's near post with the outside of his boot.

Suarez threatened again when he latched on to a Steven Gerrard pass and when his shot from a tight angle was parried by Spurs' French keeper, the Reds felt they should have had a penalty after full-back Walker tugged Coutinho as he tried to get to the rebound.

Bale had been contained by Liverpool and overshadowed by Suarez but, after shooting high following a surging run, the Welshman made his presence felt when he crossed for Vertonghen to beat right-back Glen Johnson to the ball and head home on the stroke of half-time.

The goal lifted the visitors and they added a second shortly after the break as Bale and Vertonghen combined again to undo Liverpool.

Bale delivered a free-kick that the Reds failed to clear, and centre-back Vertonghen showed a striker's prowess to drive home the loose ball.

Spurs were now overwhelming their hosts but failed to take a key chance to go two ahead. Gylfi Sigurdsson was found at the far post by Bale only to see his shot deflected off Jones against the outside of the upright.

The miss looked more costly when Walker's inadvertent backpass was missed by Lloris as he rushed out to meet it and Downing pounced to drive a low shot through the legs of Vertonghen.

Spurs striker Jermain Defoe then put his side in trouble again when he inexplicably played a ball into his own area for Suarez, who went down under Assou-Ekotto's shove.

Gerrard stepped up to send Lloris the wrong way from the spot and move Liverpool above Everton.

Tottenham manager Andre Villas-Boas: "It is difficult for us to take because we did ever so well to come back into the game in the first half and we started brightly in the second half.

"We lost control of the game when things looked to be going our way, which was more down to a couple of mistakes we did rather than to Liverpool's merit - although they worked very hard.

"Hopefully, this setback can serve as an example to move forward."