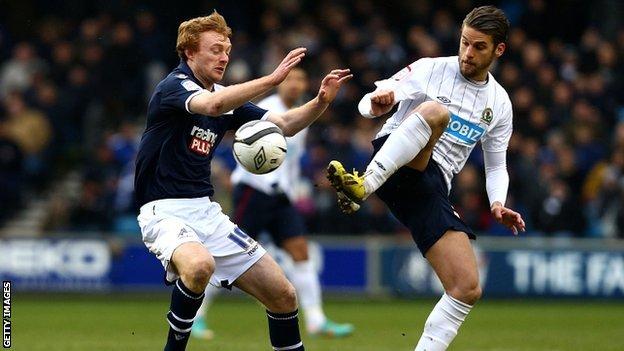 Millwall and Blackburn will face an FA Cup quarter-final replay on Wednesday after sharing a combative draw.

Andy Keogh's header hit the post in a poor first half while Blackburn did not create a chance until Jordan Rhodes fired over after the break.

Blackburn improved towards the end, and Josh King hit the post with a header.

But Kenny Jackett's side will feel more aggrieved as they were in the ascendancy as the game finished, with Shittu testing Kean with another stinging shot late on.

It was hardly a thriller at The Den, but with a last-four place at stake Blackburn had to defend for the majority of the game as the two Championship teams head back to Lancashire in three days time still in the hat for the draw.

By then, they will know which team they could face in the semi-finals at Wembley, but on the basis of this encounter they will face a huge task against Premier League opposition.

Since winning in the FA Cup fifth round, both sides have had one win in nine league games between them and there was a lack of quality in front of goal, with Hulse the most guilty party during the second half.

Aside from Keogh's effort against the post, Millwall and Blackburn spent most of the first half sizing each other up where, in keeping with both teams' form, creative play was limited.

David Bentley looked more interested in causing a ruck, while Scott Dann was caught and cut by Rob Hulse's stray arm, but Millwall conjured up the majority of the openings.

The hosts were finding more gaps in midfield thanks to their 4-3-3 formation and it was in one such pocket of space that Jack Smith crossed for Keogh's effort, but the striker was denied by the upright.

Rhodes, whose goals have been invaluable to Blackburn this season, took until the second half before he had a decent opportunity. After an early sniff, he latched onto Bentley's right-wing cross after 47 minutes but his shot fizzed just over the bar at the back post.

Michael Appleton's side improved after the break, but the game almost exploded into life as Millwall went close to scoring twice in the space of two minutes just before the hour mark.

First, Shittu attempted an outrageous shot from 40 yards which was heading for the top corner before Kean tipped over. Hulse then missed a sitter from six-yards out after Smith's ball down the line was crossed in by Keogh.

Blackburn sensed the threat from their opponents and produced their best chance when King's header struck the same post as Keogh, following Bentley's deep cross.

But Millwall finished the stronger as Shittu tested Kean once more, although the hosts could not find a way through.

Blackburn boss Michael Appleton: "I was delighted with the way the lads went about it. I had three or four players who were only 60-70% fit and we've got another chance to get through.

"It's always going to be a battle when you come to the Den with the Millwall fans behind them. It was difficult because the ball was changing hands that many times, I'd be surprised if there were three or four [consecutive] passes in the whole match.

"There were a lot of tackles flying around today and a couple of cheap shots going on out there, which is disappointing. As long as we get a strong referee on Wednesday I don't see there being any problem."

"Goalscoring has been a problem for us in 2013. The win was there for us. It is frustrating. In 2012 it wasn't a problem for us, but I think today showed that when we do get on top of sides, we need to score and we didn't.

"There was no lack of passion from the players, but we didn't finish. It's something that we need to improve."