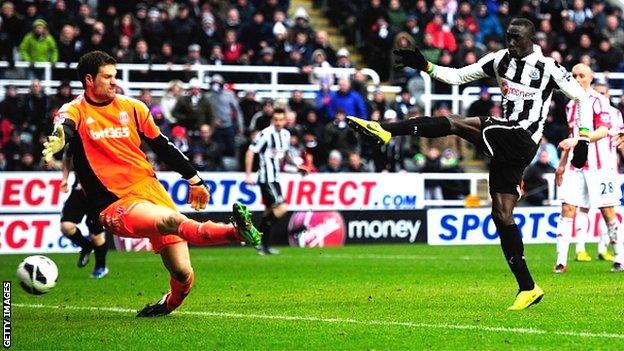 Papiss Cisse scored a stoppage-time winner as Newcastle came from behind for the third straight home Premier League game to deservedly beat Stoke.

After a lacklustre first half and against the run of play, Chieck Tiote clattered Jonathan Walters in the box and he converted the spot kick.

But some poor Stoke defending allowed Newcastle to hit straight back through Yohan Cabaye's well-placed free-kick.

Cisse then secured the points with a close-range finish at the death.

His last-gasp strike made it four wins in six league games for the resurgent Magpies and moved them up to 13th in the table.

They can now focus on Thursday's Europa League last-16 second leg against Anzhi Makhachkala and Sunday's trip to Wigan with fresh optimism.

Stoke, by contrast, own the top-flight's worst record in 2013 - they have lost seven of their last nine games and have only one victory in 10.

This was a golden chance for the Potters to secure a second away win of the season, but they were undermined by uncharacteristic defensive lapses.

For so long their game plan of keeping tight at the back before launching counter-attacks when possible was working well.

A Newcastle side featuring seven changes from that which started at Anzhi in midweek dominated possession and territory, but rarely carried the cutting edge required to open the scoring.

Cabaye and Jonas Gutierrez fired wide, while at the other end Stoke were furious that referee Andre Marriner opted against penalising Davide Santon when he appeared to trip Ryan Shotton on the edge of the area.

Yoan Gouffran had the best chance to break the deadlock, only to loop his finish over the bar after being picked out by Cabaye.

A similar pattern emerged in the second half - the hosts passed and probed, the visitors defended stoutly and launched the occasional foray forward.

Tiote brilliantly released Sissoko, the midfielder taking a heavy touch under pressure from Begovic, but his afternoon then took a turn for the worse.

The Ivory Coast international raced back to help contain a Stoke break, only to completely mistime his challenge on Walters inside the box.

Walters, who scored two own-goals and in January, stepped up to wrong-foot Rob Elliot and find the bottom corner.

However, any hope they had of an away win were quickly distinguished when Glenn Whelan almost played in Gouffran and the ball fell to Sissoko, who was fouled on the edge of the box.

From the resulting set-piece, Cabaye left a diving Begovic with little chance as his curling effort cannoned off the bar and over the line.

"It's difficult to quantify [how important it is]. It was a tight game. Stoke were excellent. Every question we asked they had an answer for. We were a bit tired in our minds in the first half, not sharp in our thinking.

"They got a goal you sensed may have come, they had a couple of penalty shouts before that. But our quick response was key to victory - it was a fantastic goal by Yohan.

"We changed from the bench. Marveaux pops up with an eye-of-the-needle pass for Papiss to win it for us. It's a massive win. We go home in a much different situation than we would have been if it hadn't gone in.

"It sets us up lovely for Thursday in the Europa League. We've got a great European night at St James' Park to look forward to. It definitely gives us a chance to look at the top 10, where we should be."

"It's disappointing after going in front and really restricting Newcastle. I don't think Asmir [Begovic] had a shot to save.

"The first goal is a dreadful mistake from us, the second is onside, but Cisse could easily be off the pitch. He raised his hands twice - he pushed Wilo [Andy Wilkinson] and then he slapped Ryan [Shawcross].

"That's disappointing and the fact the we could have had a penalty in the first half. But that's been our season. Away from home we've played better than at any time in our five years in the Premier League, we've been in more games, we just haven't been able to get over the line.

"The lads will keep going. We're desperately disappointed because it's happened so many times this season, it just seems to be one of those seasons that irrespective of what we do we just can't get over the line."