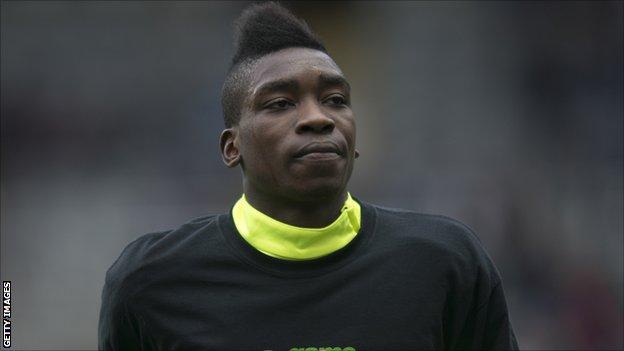 The 20-year-old marked his debut for the Teessiders with an individual goal.

"It was a brilliant goal - it's what he's been doing on the training ground all week," Mowbray told BBC Tees.

"He's been dancing past people with his quick feet and smashing it in the back of the net."

Ameobi was withdrawn with 16 minutes remaining at the Riverside, bringing a premature end to his first start since Newcastle's FA Cup defeat by Brighton in January.

Mowbray continued: "It was a test for him, and he'll find that he'll have to work a bit harder in the Championship.

"The turnover of the ball is greater, so you have to run a lot more than you do in the Premier League."

Boro's other goalscorer in Saturday's game was Kieron Dyer, who scored his first goal since signing a short-term deal in January.

Dyer, who played alongside Mowbray at Ipswich as a teenager, has made five appearances.

"I'm pleased for Kieron to score a goal, he's missed a lot of football over a lot of years and yet he's got an intelligent football brain," Mowbray added.

"He's not going to play every week, but he can contribute."