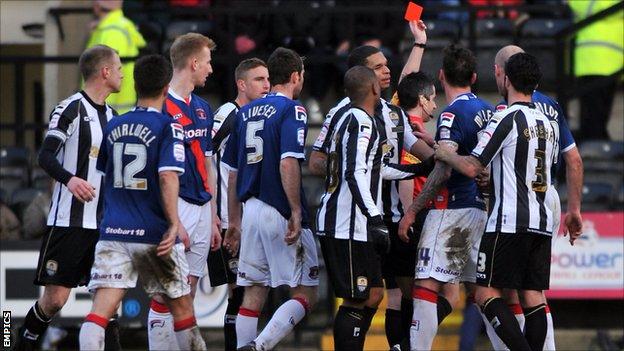 Carlisle United boss Greg Abbott says Lee Miller's suspension presents an opportunity for other strikers in his squad to impress in the first-team.

Captain Miller was dismissed for violent conduct in Saturday's 1-0 defeat by Notts County, resulting in a three-match ban.

"Somebody has to come in and take Lee's place and do a good job," Abbott told BBC Radio Cumbria.

"There is an opportunity opening for somebody, but it is a disappointment [Miller's suspension]."

Miller has been a regular member of the United team since returning from a niggling ankle injury against Shrewsbury in December, scoring three goals in 16 appearances.

The Cumbrians are five points above the relegation zone in League One, having followed a four-game unbeaten run with five games without a victory.

However, Abbott is adamant the signs are positive going into Tuesday's trip to Crawley.

"I think we have shown that we are a decent side and off the run we have had before the Walsall game, we were doing ok," he said.

"The first-half of MK Dons and the Walsall game was pretty poor, but all the teams in our league have those.

"You have just seen Notts County moaning about their performance, but they have got a win, it is all about results at the moment."