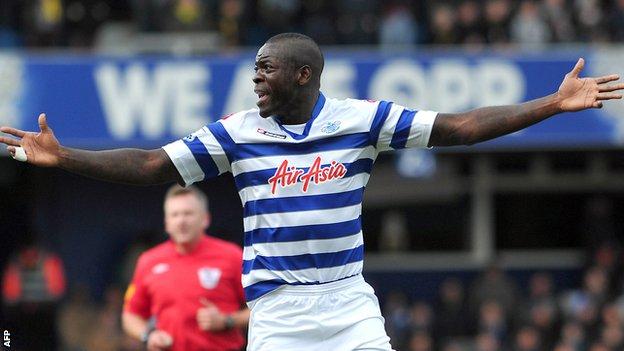 QPR recently rejected a "massive offer" from a Russian club for Chris Samba, according to manager Harry Redknapp.

Samba arrived from Russian side Anzhi Makhachkala for a club-record fee of £12.5m in January, but was subject to an even bigger bid before the Russian transfer window closed on 27 February.

"We had an offer for Samba right on the deadline and the chairman turned it down," said Redknapp.

"We had an offer of more money than what we paid for Samba."

Redknapp, who steered his side to within four points of Premier League safety with a 2-1 win at Southampton on Saturday, revealed he left the decision in the hands of chairman Tony Fernandes.

"The chairman asked me 'what do you think?' and I said 'it is up to you, it is your club, it is your decision'.

"I left it to the chairman. He came back and said he had turned it down and said 'get on with it'."

Since Fernandes bought the club in August 2011, QPR have signed 28 first-team players, including six in January.

The ex-Blackburn defender, 28, played an important role in QPR's win at Southampton, and Redknapp is relieved Samba will remain at Loftus Road.

"The player probably spoke to the chairman but it was really important we kept him," he said.

"It was really good for us. Had we had lost him, I would say that is football - he is a proper player."

Samba had previously spent five seasons in the Premier League with Blackburn before moving to Russia in February 2012.