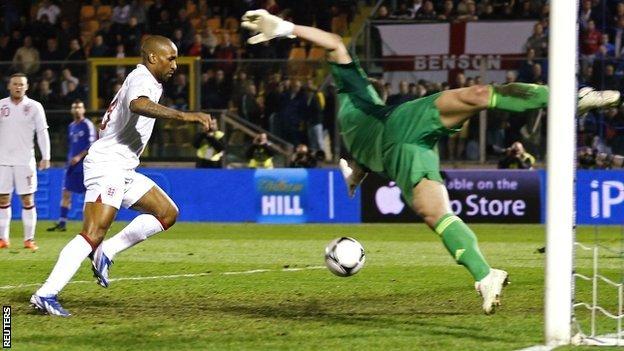 England completed the formalities of outclassing the minnows of San Marino to record their biggest win since October 1987.

Roy Hodgson's side repeated the eight-goal Wembley victory against Turkey in a predictable mis-match when faced with the country ranked lowest in the world standings in 207th place.

England can take credit for a job ruthlessly done and will be pleased to have suffered no injuries or any serious alarms before they head to Podgorica for Tuesday's more testing World Cup qualifier against group leaders Montenegro, who are two points clear of England having beaten Moldova.

Wayne Rooney, substitute Daniel Sturridge and another from Defoe completed the rout as England creditably refused to let up in the quest to improve their goal difference.

With the host's best foray resulting in a second-half corner, the merits of such an embarrassingly one-sided World Cup meeting will be debated again. But England could only exert their vast superiority in a professional manner - which they did in impressive fashion.

Hodgson kept captain Steven Gerrard back for Montenegro while Ashley Cole, one yellow card away from suspension, was replaced by Leighton Baines.

And Baines was heavily involved as the procession started early, crossing from the left and forcing Della Valle to turn the ball past his own keeper Aldo Simoncini.

The rest of the half was predictably one-sided as England took up permanent residence in close proximity to San Marino's goal and rattled up the scoreline.

Oxlade-Chamberlain, in the side after Arsenal team-mate Theo Walcott prepared to return to England with a groin injury picked up in training, then added the second with some fine footwork and a cool finish.

Defoe had already had a goal ruled out for offside when he put England three up after 35 minutes. He scored from virtually on the line after Rooney's cross picked out Oxlade-Chamberlain at the far post.

The woeful standard of opposition meant it was almost an open invitation for England to score goals but there was no dispute about the quality of the fourth goal as Young rattled a magnificent rising 25-yard finish past Simoncini.

And Lampard, captain on his 95th England appearance, made it five just before half-time as he was the beneficiary of more fine work from Baines to score in composed fashion.

"The announcer inside Stadio Olimpico di Seravalle may have reversed the name of every England player - prompting the chant "One Sturridge Daniel" - but nothing was reversing San Marino's standing as world football's most inviting punchbag."

Rio Ferdinand, who withdrew from the England team to stick to administered training programme, was the subject of abusive chanting from the visiting England fans.

But on the pitch, Rooney - who was a focal point for England - deservedly got on the scoresheet nine minutes after the restart with an excellent free-kick beyond the reach of the besieged Simoncini.

It was his final contribution as Hodgson removed him with the more taxing examination in mind. He and Tom Cleverley were replaced by Leon Osman and Daniel Sturridge.

And Liverpool's £15m striker wasted no time getting on the scoresheet with a simple header from Young's perfect cross before Defoe scored another poacher's goal to make it 8-0.