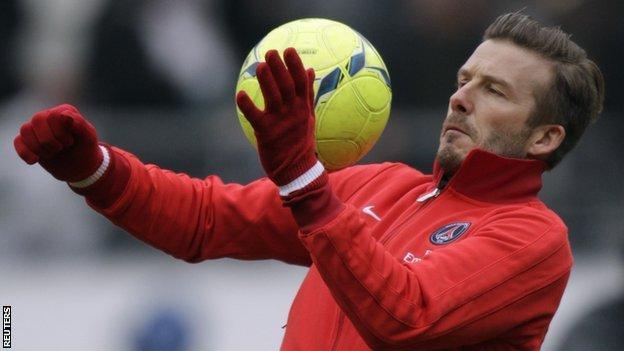 David Beckham has become a global ambassador for Chinese football to help the image of the country's game.

The Chinese Super League has recently been hit by the exit of ex-Chelsea striker Didier Drogba, while also suffering from a match-fixing scandal.

Beckham, 37, will combine the role with playing for Paris St-Germain.

"I am honoured to have been asked to play such an important role at this special time in Chinese football history," he said in a statement.

His role will involve attending league matches in China and visiting clubs to help promote the game to children.

"I'm excited by the prospect of promoting the world's greatest game to Chinese sports fans as I've seen first hand the growing interest in football there," added Beckham.

"This is a wonderful sport that inspires people across the world and brings families together, so I'm relishing the opportunity of introducing more fans to the game."

But the Ivory Coast international left the Chinese club in January 2013 for Turkish side Galatasaray, in a controversial loan move.

The departures have been a blow to the Chinese game ahead of the 2013 Chinese Super League season starting on 8 March.

There have also been problems with corruption, which resulted in the country's former top referee being jailed and 58 officials being banned for match-fixing by Fifa and the Chinese Football Association.

Beckham was a special ambassador for the 2012 London Olympics and the worldwide icon's role will be promote Chinese football domestically and globally.