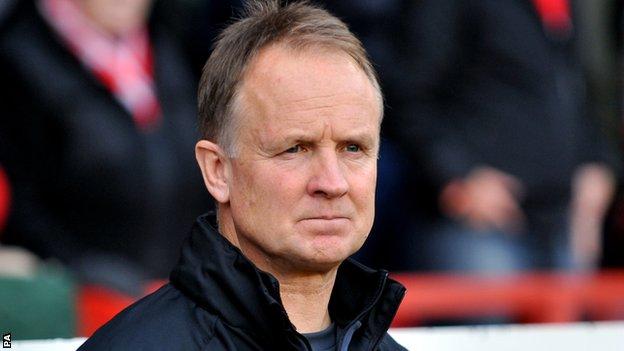 Bristol City head coach Sean O'Driscoll says he is more concerned by the way his side is performing than whether they are getting points on the board.

Following Saturday's 0-0 draw at Blackpool, O'Driscoll's side lie bottom of the Championship, two points away from safety with a game in hand.

But the 55-year-old is concentrating on improving his side's displays, rather than the points they take from games.

"It's about performances, not about points," he told BBC Radio Bristol.

"That was another performance. We could have got results in every game we've played, but we've not been consistent from the first whistle to the last."

Saturday's result was the first draw that the Robins have had since O'Driscoll replaced Derek McInnes at Ashton Gate in January, having previously lost all four of their away games, and having won all four of their home matches under the former Nottingham Forest boss.

It was also the first time the club have been involved in a goalless draw since March 2012, which came at Fratton Park against Portsmouth.

And O'Driscoll feels that the result against Paul Ince's side could prove a turning point in their season.

"We've been consistent in our performances, but not consistent enough," O'Driscoll commented.

"It's a step in the right direction, we were good against Barnsley but tailed off and conceded three goals.

"We've not tailed off today, and managed to keep a clean sheet away from home, which is something we have been striving for."