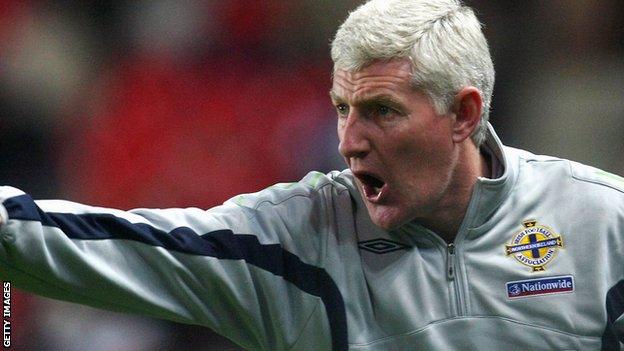 His arrival comes less than two days after Gary Mills was sacked following the 2-0 defeat by Bradford on Saturday.

A club statement said Worthington's appointment was "based on his Football League experience, strong coaching ability and extensive knowledge of players throughout the leagues".

The 51-year-old has been out of work since leaving Northern Ireland in 2011.

He has vast experience of managing in the Football League, which was the main criterion we were looking for

The former Sheffield Wednesday and Leeds player started his managerial career at Blackpool in 1997, where he was originally appointed as player-manager.

After two years at Bloomfield Road, he then acted as assistant to Howard Wilkinson with England Under-21s before joining Norwich as Bryan Hamilton's assistant.

Following Hamilton's departure in 2000, Worthington took permanent charge at Carrow Road, where he enjoyed arguably his most successful period in management.

During a six-year spell with the Canaries, Worthington took Norwich to the Premier League, having won the old First Division championship with a club record 94 points.

However, the following season they were relegated and Worthington was sacked as Norwich started poorly back in the second tier.

After a brief spell as caretaker manager at Leicester, he was appointed Northern Ireland boss in 2007 and went on to spend four years in charge of the national side.

But following a solid start, which included an impressive 2-1 win against Denmark in a Euro 2008 qualifier, Worthington went on to endure a torrid spell, winning just two of his last 24 games at the helm, scoring only 12 goals in the process.

His post at Bootham Crescent is his first since October 2011.

Communications director Sophie Hicks believes York have got the best man for the job.

"He has vast experience of managing in the Football League, which was the main criterion we were looking for," she said.

"He is also an excellent coach and we believe he's the right person to take us forward."

With York currently 18th in League Two and four points above the relegation zone, Hicks said the club's board of directors expect Worthington to make "an immediate impact".

"We want to give Nigel the opportunity to work with the team and to get the result we need on Saturday," she added.

"You can draw similarities to when he joined Norwich City who were just hovering above the relegation zone," he said.

"He managed to steady the ship and they went on to promotion to the Premiership. He certainly has the experience for it."

Gee has been replaced by Fred Barber, who this morning left his position at League One Bury to join Worthington at Bootham Crescent.