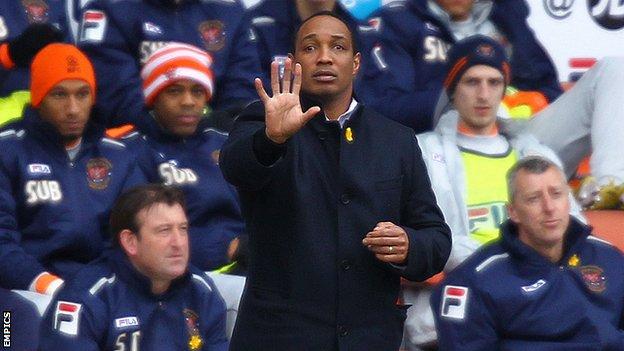 Paul Ince has admitted it is a worry that Blackpool have not found the net in his three games as manager.

The Seasiders have gone four games without a goal, having also failed to score against Ipswich in their last under caretaker boss Steve Thompson.

"It's a concern that in four games we haven't scored a goal, but it would be more if we were conceding goals," Ince told BBC Radio Lancashire.

was their second consecutive stalemate.

Blackpool lost 2-0 at Leeds in Ince's first game in charge and followed that up with a 0-0 draw against Leicester at Bloomfield Road.

And Ince is now scouring the loan market to try and increase his attacking options.

His son Thomas has scored 17 times this season, while no other Blackpool player has managed more than seven goals in all competitions.

We want to try and play football but we have to try and change our mindset when we play at home. It's going to be a battle because that's how the conditions make us play

"If Thomas doesn't score, we don't seem to score," said the 45-year-old. "I think sometimes other players have to take the responsibility on themselves. They can't just rely on a 21-year-old kid to score goals all the time.

"Whether that's down to not putting themselves in the right positions or things not falling for them, like it did on Saturday, we're looking and we're trying to get a couple in to start scoring goals."

Another concern for Ince, as it was for previous bosses Ian Holloway and is the condition of the pitch at Bloomfield Road, which he feels is preventing his team from playing in the style he would like.

"It's a struggle for us as you can see," he added. "We want to try and play football but we have to try and change our mindset when we play at home. It's going to be a battle because that's how the conditions make us play."

However, one positive from Saturday's game was the performance of defender Gary MacKenzie, who just 24 hours earlier.

Ince said: "I thought he was immense, considering he got in a taxi up on Friday from Milton Keynes.