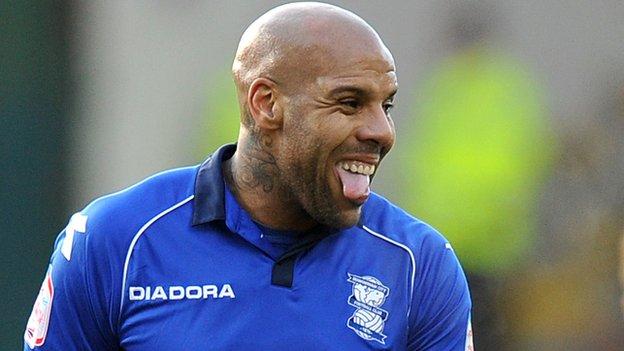 Birmingham City top scorer Marlon King has been ruled out for the season after being forced to undergo knee surgery.

The 32-year-old striker was due for an operation on Monday to clear an injury that has hampered him all season.

After hitting 18 goals last season in helping Blues to the Championship play-offs, King has made light of the injury to score another 14 this term.

But Blues boss Lee Clark admitted to BBC WM: "As the weeks have gone on his knee has not held up too well."

It was only their second defeat in nine league games since New Year's Day, leaving them just six points above the relegation places.

Birmingham are at home to Blackpool on Tuesday and Clark is aware of the void that King's injury will leave.

"It's a big blow for us," he said. "Marlon's an experienced player, a goalscorer and, whatever formation he plays in, he's a threat.

"We've taken advice from a specialist to get it done and he'll then have to get through his rehab to be ready in time for pre-season training.

"But losing him is someone else's opportunity and we'll now have Wes Thomas and Peter Lovenkrands fighting for a shirt."

Meanwhile, Birmingham International Holdings is to hold a board meeting next week (15 March) to approve the release of the club's overdue accounts for the 2011-12 season.