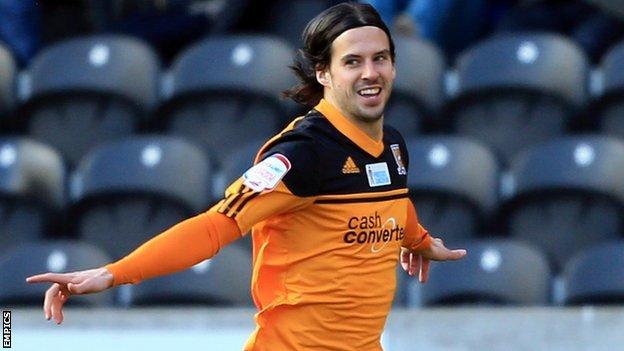 Hull City manager Steve Bruce was left shocked at just how good George Boyd is after his home debut in Saturday's 5-2 win over Birmingham City.

Boyd's two goals were his first since signing from Peterborough last month.

"It was a wonder show. His work-rate and intelligence - he looked the real deal," Bruce told BBC Radio Humberside.

"I've always been a big admirer, but I didn't know he was that good. If he can keep performing like that then we've got some player on our hands."

The 27-year-old forward was on the verge of joining fellow Championship side Nottingham Forest in January but an inconclusive eye test halted the move.

Instead, he joined the Tigers on loan until the end of the season when the deal will be made permanent for an undisclosed seven-figure fee.

"It's a great start for the lad and he certainly gave the supporters value for money," Bruce continued.

"He has all the attributes of the modern day player. He's left-footed, over six feet tall, and can play numerous positions.

"He's got a huge appetite for the game - his work-rate is just second to none and that's something I really love in a player."