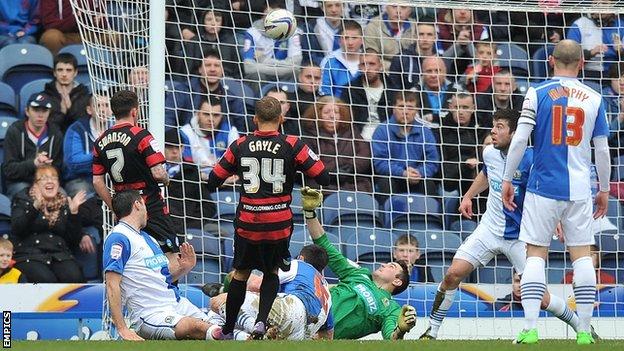 Hat-trick hero Dwight Gayle believes Peterborough United must keep playing attacking football if they are to escape the threat of relegation.

Posh lifted themselves off the bottom of the Championship by beating Blackburn Rovers 3-2 on Saturday.

Gayle told BBC Radio Cambridgeshire: "We were probably a bit too defensive in our two previous games.

"Against Blackburn we were committed to attack, even away from home, and it really paid off."

"He's better than I thought he would be. He's the real deal

With Gayle partnered by Nathaniel Mendez-Laing, and Lee Tomlin playing just behind the strikers at the tip of a midfield diamond, Peterborough took the game to Blackburn from the start.

The 22-year-old's three goals all came in the opening half hour, and though Rovers reduced the arrears in the second half through Jordan Rhodes and, in the last minute, David Jones, Posh manager Darren Ferguson had no doubt his side thoroughly deserved the victory.

Gayle, who two seasons ago was playing for Stansted in the ninth tier of English football, said the hat-trick was the biggest achievement in his career to date.

Since joining Peterborough from Dagenham & Redbridge last November - initially on loan - he has scored 10 Championship goals, but none since 29 December prior to the Blackburn game.

"I always have belief in my finishing ability, I've been waiting for the chances, and luckily a few came my way," said the Londoner.

"I could never have dreamed of this last year, playing at Conference level, I've definitely surpassed my expectations since coming here. To be honest, at first I was surprised to even be playing, and to get a few goals that help out the team, it's all I really wanted.

"We really needed the three points, otherwise we'd have been a bit adrift, but hopefully we can kick on now and get out of it. It's a massive boost with two home games to come and really boosts confidence."

Ferguson, who believes Peterborough need at least five wins from their final 12 games to stay up, admitted Gayle had surprised him.

"He's better than I thought he would be. He's technical, doesn't give the ball away, and makes clever runs. He's the real deal," said the Scot.