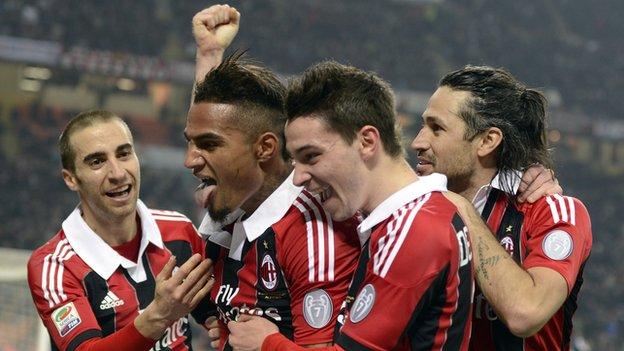 Ghanaian midfielder Kevin-Prince Boateng scored AC Milan's second goal of the game as they outclassed Lazio 3-0 to stay third in the Serie A table.

Fellow Ghanaian Isaac Cofie also netted for Chievo after coming on as a first-half substitute. It was Cofie's first goal for Chievo but despite his equaliser his side lost 2-1 to Fiorentina.

Michael Essien played the entire 90 minutes in arguably the biggest game in international club football as his side Real Madrid edged out arch-rivals Barcelona 2-1. Despite the victory - the second in a row against league leaders Barcelona in only a few days - Madrid lie in third position and 13 points behind their rivals.

As transfer speculations mount that will be leaving Spain, the Nigerian striker came off the bench on Sunday for Levante in the 2-2 draw with Valencia. Martins did not score but played the last 32 minutes.

Ivory Coast striker Wilfried Bony increased his tally as top scorer of the league to 23 goals after netting home the second for Vitesse Arnhem who defeated Utrecht 2-0.

League holders Montpellier won their third consecutive game after beating Rennes 2-0 with the Senegal striker Souleymane Camara sealing victory in the 86th minute. Camara has scored eight goals as sixth placed Montpellier continue their climb within the top 10 of the table.

Benin defender Christopher Glombard was sent-off after receiving his second yellow card in the 60th minute but his side Reims still surprised Paris Saint-Germain by beating the league leaders 1-0.

Gabon striker Pierre Aubameyang notched home his 15th goal of the season after finding the back of the net for Saint Etienne in the 7th minute from the penalty spot in their 4-0 crushing of Nice. Aubameyang is the league's second highest top scorer.

Another penalty occurring simultaneously was scored by Benjamin Moukandjo from Cameroon who gave Nancy the lead in their 2-1 victory away at Sochaux.

No fewer than five red cards were dished out in the Corsican derby between Bastia and Ajaccio. Four of the expulsions came at the end of the game and included the Kenya striker Dennis Oliech whose side Ajaccio lost 1-0. Oliech's kicking of an opponent at the end of the game sparked a free for all which resulted in three other sending offs.

Morocco midfielder Kamel Chafni was on target for 15th placed Brest who drew 1-1 with Lyon. And Ivory Coast striker Salomon Kalou scored the winning goal for Lille who came from behind to beat Bordeaux 2-1.

Democratic Republic of Congo striker Lomana Lua Lua gave Karabukspor the advantage as his goal helped them to lead before half-time after coming from behind. However, Karabukspor lost their lead in the game as they were beaten 3-2 by Orduspor.

There were three African goals in the seven-goal thriller between Antalyaspor and Gaziantepspor. Antalya won 5-2 with goals by Nigerian Isaac Promise and the Senegalese Lamine Diarra. Dorge Kouemaha scored Gaziantep's second and final goal.

Mozambique defender Mexer equalised for Nacional in the 54th minute as his side came from behind o beat Gil Vicente 2-1.

Four minutes after coming on as a substitute Cape Verdian Kukula equalised for Maritimo who drew 1-1 with Moreirense.

In the only game played at the weekend, Zulte-Waregem edged out Sporting Charleroi by a lone goal thanks to a last gasp strike by the Senegalese Mbaye Leye in added time. It was his ninth goal of the season.

Nigeria striker Lucky Idahor scored the opening goal as his side Zorya beat Hoverla 2-1. Another Nigerian, midfielder Lukman Haruna, scored the opener for Dynamo Kyiv who drew 1-1 with Kryvbas. But Tunisia defender Anis Boussaidi was sent-off in the 68th minute as his side Tavriya lost 2-0 to Karpaty.

The league's top scorer Rafik Djebbour increased his tally to 20 goals after scoring twice for Olympiakos who thrashed OFI 4-0.

Senegal striker Pape Habib Sow was also on target as his 70th minute goal helped Panathinaikos to a 2-0 away win over rivals AEK Athens.