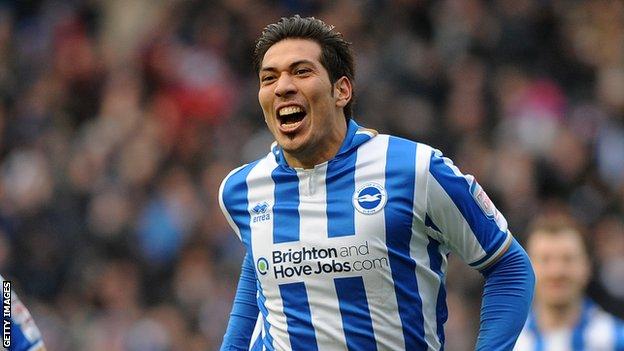 Brighton manager Gus Poyet is thrilled with how striker Leonardo Ulloa is adapting to life in the Championship.

The Argentine, who joined the Seagulls in January, scored a hat-trick against Huddersfield on Saturday to take his tally to five goals in seven games.

Poyet told BBC Sussex: "I am delighted for him because the fitness side has been difficult for him.

"It is difficult for any player to come to England in the middle of the season and get the pace of the game."

He added: "For a striker to score three so early in his career in England is fantastic.

"We need to make sure we keep him there. With him scoring goals, it's easier."

Brighton paid a fee of around £2 million to Spanish second division side Almeria to secure the 26-year-old's services in the transfer window.

Ulloa's treble against the Terriers was the first hat-trick scored at the Amex Stadium.

"The fans now know why he is here," Poyet said.

"We know he moves in the box very well, has the ability to hold the ball up and heads it well.

"The third goal was quality but I think the second was the best of all.

"The timing of the jump, the power of the header and the angle - heading it down - it was a proper old number nine's goal."