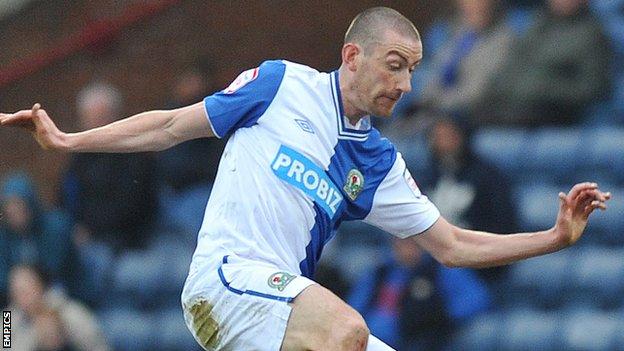 David Jones has said he is grateful to Wigan manager Roberto Martinez for allowing him to join Blackburn on loan.

The midfielder has rarely featured for the Latics in recent weeks.

And by Rovers, Jones told BBC Radio Lancashire that Martinez was more than accommodating.

"The manager listened to my thoughts. In a way, he did me a favour by letting me go when he perhaps needed some cover (in midfield)," said the 28-year-old.

"He listened to what I wanted and what was best for me. The opportunity came and I was very eager to take it so I'm happy it went through."

Jones made his Blackburn debut shortly after confirming his loan move on Saturday, appearing as a

He netted a late goal at Ewood Park but could prevent Michael Appleton's side falling to a third defeat in four Championship matches.

"It was a very surreal couple of days with the loan being pushed through quite quickly," added Jones, who has started 21 Premier League games for Wigan since his move to the DW Stadium in 2011.

"I was delighted to get some game time and I was just disappointed with the result.

"I train really hard and prepare myself well. You want to be playing on a regular basis and, in recent weeks at Wigan, I haven't done. After having a chat with the manager, I felt it was a good decision and a good opportunity to come to such a good club."

Another loanee - Hull's Cameron Stewart - also made his first appearance for the club at the weekend.

"It's a big opportunity for me to get some games and show the world what I'm about again," said the winger, who spent time with Blackburn's Lancashire rivals Burnley earlier in the season and

"I had a good indication that I'd be allowed to go back out on loan when I was back fit. I was a bit out of shape having not played in a fair few months. I worked hard and knuckled down to get myself back out there."

Blackburn travel to in-form Bolton on Tuesday - their final league match before they face Millwall for a place in the last four of the FA Cup.