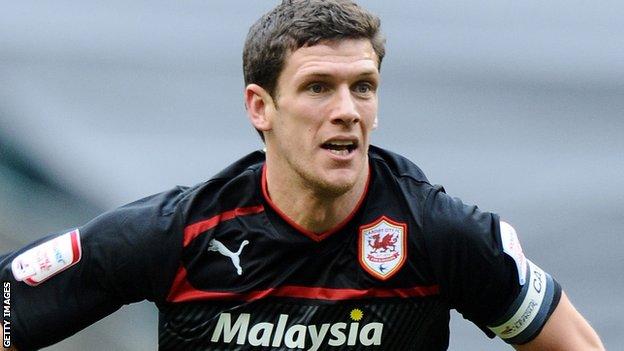 Hudson sat out the 2-1 defeat at Middlesbrough with an ankle injury and will also miss the home game against Derby County.

Manager Mackay hopes the centre-back he describes as a consistent performer will be fit to face Leicester on 12 March.

"He's always a miss when he's not playing," Mackay said.

"I don't think in terms of the way the boys played [at Middlesbrough] he was a miss.

"But certainly when he plays he's a leader and someone that brings a calmness to our back four.

"He's working hard during the week. He'll start out on the pitches again and we'll see how he goes and whether he's involved at Leicester or not."

With Hudson absent, Mackay was unhappy with Cardiff's defending at Middlesbrough which saw them concede two goals in the opening 17 minutes.

But the Cardiff manager again praised youngster Ben Nugent, who came on at half-time at the Riverside.

"I think Ben's come in and shown a maturity beyond in his years in terms of the way he's stepped in to high end Championship football pressure cooker," Mackay added.

"He's looked as if he's been there for a few years."

Tuesday's game against Derby will be the first home game since owner Vincent Tan admitted in a BBC Wales interview he could consider changing the club's name.

Tan later moved to reassure supporters that the club's official name would not change after fans voiced concerns.

And Mackay believes the fans will remain united as long as they're winning and have been excellent this season.

"Our fans, every time they come to watch us, have been united this season," the former Watford boss said.

"They've been exceptional and they've supported our team through thick and thin over the years, never mind the last week.

"Coming to the business end of the season we want the stadium as rocking as it can be every time we're in it. They haven't let us down - they've gone way beyond that."

The Malaysian had been chairman of Cardiff since May 2010 and a director since May 2009 but resigned because of business commitments.

"He's a very important part of the history of this football club."