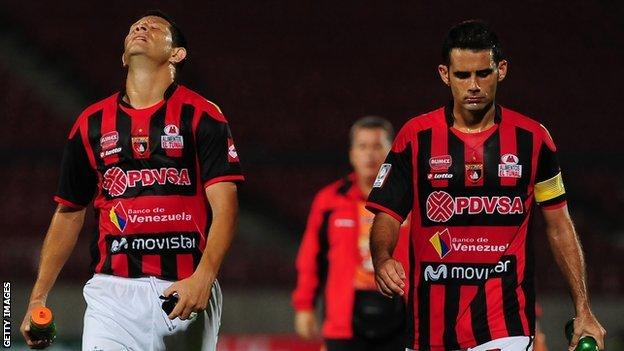 What is the true measure of the state of a country's football - the domestic league or the national team?

A few decades ago the question hardly made any sense. One was a reflection of the other. These days, though, it is not so simple. In many cases the domestic and the international no longer go arm in arm. A process of 'decoupling' has taken place.

This rather ugly term is most often used by economists, which is appropriate because the root cause of the process lies in forces unleashed by that dismal science. The key development has been the establishment of the global market in footballers.

Other spin-off factors have also contributed. Improvements in air travel have made it easier for national teams to bring their players back from far flung club sides. An agreed global calendar for the game has also helped, making it, theoretically anyway, mandatory for clubs to release their players for international matches, wherever these may be taking place.

The Venezuelan league boasted an unprecedented infrastructure, but suddenly the best players were no longer around to attract fans to the new stadiums

In the light of these changes, old style mental nationalistic ways of thinking have given way. Until comparatively recently Brazil and Argentina, for example, would only pick domestically based players to represent their national teams - a restriction that became unthinkable once the likes of Zico and Diego Maradona made their way across the Atlantic.

Globalisation will typically favour the biggest and lead to a process of concentration. So there are fewer, bigger banks - and a handful of major (as it stands) European leagues stockpile the world's best footballers. Hence the fact that in recent years the strength of the Premier League is not necessarily reflected in a strong England side. And the remarkable rise of Venezuela - who have gone from a Latin American Luxembourg to genuine contenders for a World Cup place inside 15 years - is not reflected in the weakness of the country's domestic game.

On the one hand many of the best Premier League's players are not English. On the other, the leading Venezuelans can now be found dotted around Europe and South America.

There is another lesson that is well illustrated by Venezuelan football - the difficulty of launching a domestic league in the current globalised context.

This is a country better known for baseball and beauty contests. The poor boy's dream of escaping from poverty was built on a pitcher's mound. Rather than smashing a ball into the back of the net, he imagined himself completing a 'jonron' - the local word for a home run.

Football was more associated with immigrant communities from Spain, Portugal or Italy. But it began to make headway near the border with Colombia - it is no coincidence that Juan Arango, perhaps Venezuela's best ever player, is the son of Colombian parents. And a big breakthrough was made just over a decade ago, when the national team started winning a few World Cup qualifiers. Football caught on. In the battle for national affections, the global game was now capable of giving baseball a 'jonron' for its money.

In 2007 Venezuela staged the Copa America for the first time. The local FA used the tournament to put the domestic game on an entirely new level. Three impressive new stadiums were built, and improvements carried out on six more. To capitalise on the new investments, the Venezuelan first division was expanded from 10 to 18 teams.

But the process came with an inbuilt contradiction. The rise of football in the country had been based on better performances by the national team. But those very performances had put the best players in the shop window. The Venezuelan league could now boast an unprecedented infrastructure but suddenly the best players were no longer around to attract fans to the new and spruced up stadiums.

So while the Venezuelan national team has a real chance of making its World Cup debut next year, the club sides remain also-rans in their own continent.

Last year not a single game was won by the two Venezuelan teams in the Copa Libertadores, South America's equivalent of the Champions League. Indeed, in six matches Zamora failed to score a single goal. It was the second time in three years that Venezuelan clubs had not won a game in the Libertadores - and none has made it out of the group stage since Caracas reached the quarter-finals in 2009.

This year things look a little more promising. There is a big day coming up on Tuesday, when both Deportivo Lara and Caracas play their third game in the competition. The pair emerged with honour from opening-day defeats, and then bounced back to win their next match. Lara won a famous 2-1 victory over Newell's Old Boys of Argentina, Maxi Rodriguez, Gabriel Heinze and all. Caracas, meanwhile, won 3-1 away to Chilean champions Huachipato.

Lara play in one of those newly built stadiums. Their model has been to sign veterans who are no longer going to attract offers from abroad - centre-back Jose Manuel Rey, central midfielder Miguel Mea Vitali and striker Rafael Castellin are all former national team stalwarts.

Caracas have put their emphasis on youth, either developing their own players or picking up talented youngsters from elsewhere. By far the oldest player in the team that beat Huachipato was 28-year-old midfielder Edgar Jimenez, himself a product of the club's youth ranks.

Lara's old-timers will be put to the test on Tuesday away to Olimpia of Paraguay, three times Libertadores champions. The same night the Caracas kids are away to Gremio of Brazil. Only away goals took the Brazilians through when the two sides met in the 2009 quarter-finals. Since then, though, Gremio have been shopping while Caracas have been selling.

If they and Lara can fly back home unbeaten, it will show that the gap between club and national team football in Venezuela might not be so big after all.

Questions on South American football can be emailed to vickerycolumn@hotmail.com, and I'll pick out a couple for next week.

I have been very impressed with the performances of Adryan for Flamengo since he came onto the scene in the 2011 U17 World Cup. Do you think the 18-year-old has an outside chance of breaking into the national team for 2014 or will Scolari opt for the more experienced, if sometimes predictable, performers?

At the moment I don't think he has any chance at all. He has found it hard to make the jump to the first team, had a bad time in the recent South American Under-20 Championships and isn't even getting on the bench for Flamengo at the moment.

I have to say I've yet to be convinced, though he can strike the ball very well. I'm not yet really sure what kind of player he is - is he quick enough to play wide left and cut in? Might he work better in a central role? It is very early days in the career of a player who is still defining himself. It will be very interesting to see how he responds to recent setbacks.

You often use the term "unfashionable" when talking about clubs in South America, as with last week's reference to Goias. Can you explain what makes a club fashionable or unfashionable?

Football is the game of the city. The "fashionable" clubs tend to be traditional teams from the major cities. This is especially true in South America, where the continent's economic development has tended to leave many countries with one dominant capital city where most of the fashionable teams are based - ie Buenos Aries, Santiago, Asuncion, Lima, and so on.

Perhaps the biggest exception to the rule is Santos in Brazil - Santos is a relatively small city when compared with the metropolis of Sao Paulo. But Pele and his supporting cast gave the club such a rich history of stylish conquests that Santos could never be described as unfashionable, even when they are not doing well.