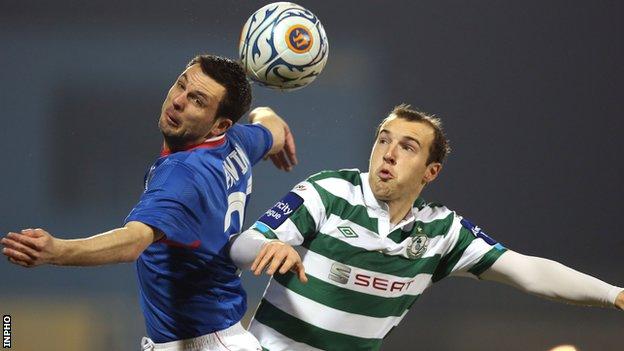 Linfield manager David Jeffrey accused his team of committing "football suicide" in their 4-1 defeat to Shamrock Rovers in the Setanta Cup.

The Blues slumped to a heavy first leg defeat in their quarter-final tie on Monday night and now face a massive task to stay in the competition.

"We are all really disappointed and frustrated at the result," he said, "we committed football suicide out there."

Linfield host Rovers at Windsor Park in the second leg next week.

Ronan Finn reacted quickest after Ross Glendinning spilled a free-kick to put the hosts in front and Ciaran Kilduff made it 2-0 with a headed finish.

BJ Burns gave Linfield hope with a superb volley but Kilduff hit the bottom corner before Stephen Rice slotted in the fourth on 82 minutes.

Jeffrey was disappointed with his team's ball retention in the first half and accepts it will be "a massive task" for them to progress. 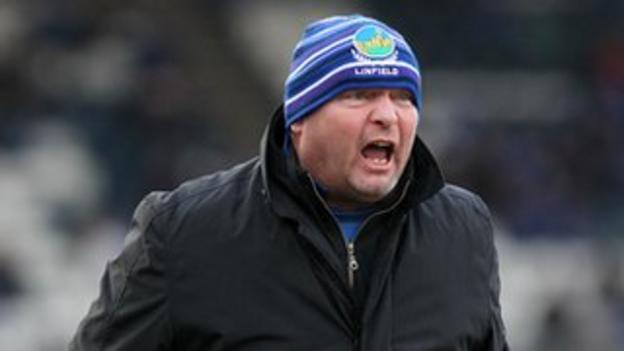 "They are a very good side and you have to give credit where it is due. Coming to Windsor Park next week they will feel they can score.

"We are going to have to be much sharper in front of goal and do better defensively."

Linfield were forced into a late goalkeeping change at the Showgrounds in Dublin on Monday night with Glendinning coming in for Alan Blayney, who felt unwell during the warm-up.

Rovers dominated the early stages but Linfield held firm and the game developed into a frenetic encounter devoid of any rhythm.

It took a goalkeeping error to break the deadlock on 34 minutes - Glendinning failed to hold Sean O'Connor's low free-kick and Finn was perfectly placed to slot in from close range.

The was drama seven minutes later when Glendinning palmed Karl Sheppard's shot onto the bar with the ball falling to Shane Robinson, who saw his shot blocked by the keeper before his header was cleared off the line by Jim Ervin.

It was a temporary escape as Kilduff headed from Finn's clipped cross just seconds before the break.

Linfield showed more urgency on the restart and they were rewarded on 62 minutes when Burns sent a 25-yard volley beyond the outstretched Murphy.

Rovers restored their two-goal advantage 11 minutes later when an unmarked Kilduff shot low into the corner from Pat Sullivan's pass.

Finn put Rice through for the final goal on 82 minutes with the substitute showing composure to slip the ball past Glendinning.

The impressive Finn skimmed the top of the Blues bar with a long-range shot before the visitors were awarded a last-minute penalty after a Jason McGuinness push on Philip Lowry.

McCaul's weak strike was pushed by out by Murphy into the path of substitute Ryan Henderson, who managed to miss the target from four yards to complete a miserable night for David Jeffrey's team.