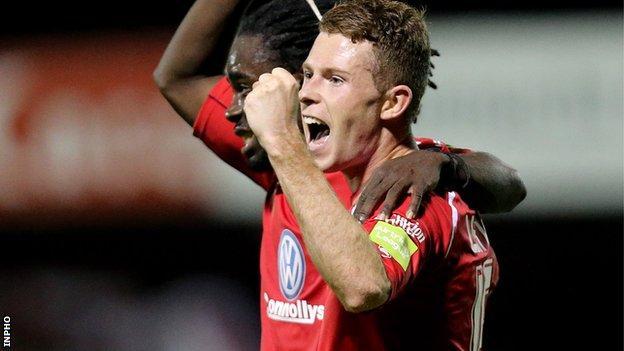 Glentoran were hammered by League of Ireland champions Sligo in the first leg of the Setanta Cup quarter-final.

Ryan Connolly squeezed the ball in before Lynch fired home to complete his double and make it 4-0 on 38 minutes.

Evan McMillan also netted on his Sligo debut when he headed in from a Joseph Ndo cross in the 53rd minute.

Glentoran were understrength for the first leg at the Showgrounds and they were no match for Sligo, particularly in the first half.

Lynch's early opener set Rovers on their way and the striker set up Elding for his 20th minute header at the far post.

Connolly scored from David Cawley's cross after 36 minutes and it was quickly followed by Lynch slotting in Sligo's fourth.

McMillan completed the rout while Colin Nixon shot over in a rare Glens effort with three minutes left.