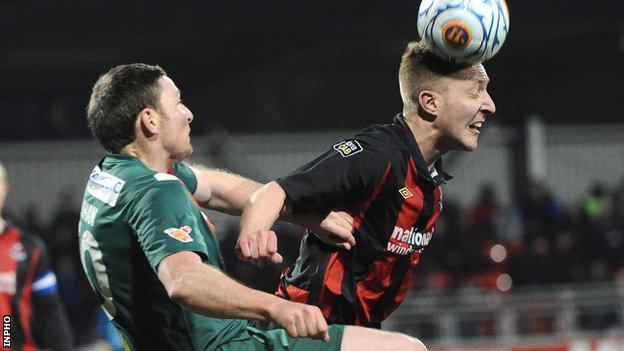 Setanta Cup holders Crusaders made a quarter-final exit at Seaview after a 3-1 defeat by Cork City saw the Irish League side go out 4-1 on aggregate.

The hosts edged a scoreless first half with Timmy Adamson and Paul Heatley denied by saves from Mark McNulty.

Daryl Horgan gave Cork a 62nd minute lead and it was soon 2-0 when Daryl Kavanagh curled in from 25 yards.

Paul Heatly fired home for the Crues with a minute left before Davy Magowan headed into his own net seconds later.

Kavanagh and Garry Buckley were off target with early Cork efforts before McNulty kept out Adamson's powerful strike and a 20-yard effort from Healtley.

Crusaders pressed on the restart as they attempted to draw level on aggregate but Cork netted the crucial opening goal through Horgan.

Kavanagh's classy finish after 67 minutes sealed Cork's progress and Heatley fired home for the hosts before Magowan's unfortunate own goal completed the scoring.