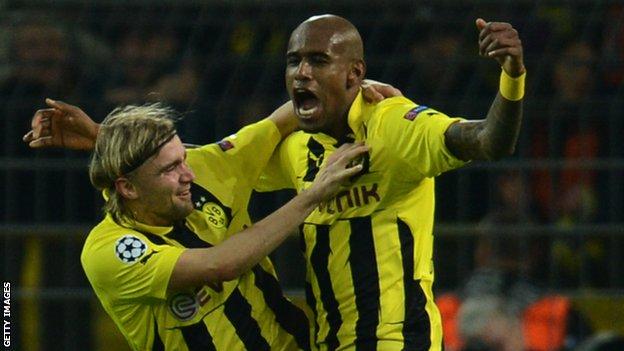 Borussia Dortmund coasted into the Champions League quarter-finals with a comfortable victory over a disappointing Shakhtar Donetsk.

Two goals in six first-half minutes put Jurgen Klopp's side in command, with Felipe Santana heading the first and Mario Gotze tucking in the second.

Dortmund needed to progress in the Champions League to keep their season alive, having fallen 17 points behind leaders Bayern Munich in the Bundesliga title race and also been eliminated from their domestic cup.

The German champions went into the game without flu victim Mats Hummels, who scored the late equaliser that earned a 2-2 draw in the first leg.

They coped comfortably in the centre-back's absence, though, despite a nervy opening half-hour as Shakhtar set out to frustrate and catch them on the counter-attack.

Dortmund created just the one early opening, as Robert Lewandowski latched on to Gotze's finely judged pass, only for Pyatov to advance quickly to block.

But any nerves for the home side were settled in the 31st minute, when Brazilian defender Santana climbed above Yaroslav Rakitskiy to thump in a header from a corner.

Shakhtar, 13 points clear at the top of the Ukrainian Premier League, struggled to mount any kind of response, and were 2-0 down six minutes later.

Lewandowski got clear down the right to deliver a low cross and Gotze - rested for the weekend's league victory against Hannover - got in between two opposing defenders to steer the ball into the far corner.

Fernandinho had the Ukrainian champions' best first-half effort with a cross-shot that Dortmund keeper Roman Weidenfeller tipped over.

And they went close soon after the break as Douglas, on as a half-time substitute, rolled a shot just wide when set up by fellow Brazilian Luiz Adriano.

But Shakhtar were finished off just before the hour mark, when Pyatov failed to hold Ilkay Gundogan's long-range shot and Blaszczykowski forced the rebound over the line.

Pyatov managed some degree of atonement for his error when he made a fine save in tipping substitute Kevin Grosskreutz's shot round the post, while Adriano was denied a consolation by Weidenfeller at the other end, but it was a night to forget for Shakhtar coach Mircea Lucescu.