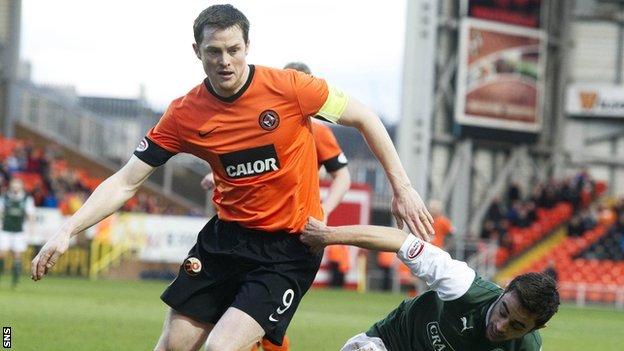 Rangers are to speak to Dundee United striker Jon Daly about a pre-contract agreement for next season.

Daly, who is from the Republic of Ireland, is the Tannadice captain but is out of contract in the summer.

United have confirmed Rangers have written to them to confirm their intention to speak to the 30-year-old skipper about a pre-contract deal.

Daly's agent, Eamonn Collins, will talk to Rangers about the player, who also has the option of a move abroad.

The striker, who can also operate as a centre-half, joined United from Hartlepool in June 2007 and has made 194 appearances for the club, scoring 70 goals.

He has represented the Republic of Ireland at Under-21 level but has yet to be awarded a full cap.

While Rangers have had a number of young players on their books from the Republic, if Daly does move to Ibrox and plays for the first team, he would become the first player from the south of Ireland to do so in the modern era.

Rangers manager Ally McCoist has admitted Daly is among his signing targets and has impressed him on a number of occasions in recent months.

"All we are doing registering a note of interest in players and Jon is one of a number who are out of contract with their own clubs at the end of this season. We're just confirming that status with the clubs.

"He ticks a lot of boxes but unfortunately at this moment in time he ticks them for Dundee United. Time will tell whether we keep our interest in players like John but we are certainly looking to strengthen the squad for next year, that goes without saying.

"We obviously can't spend any money in the transfer market but as we've said on numerous occasions we can bring in free transfers and register them on September 1 with a view to strengthening the squad."