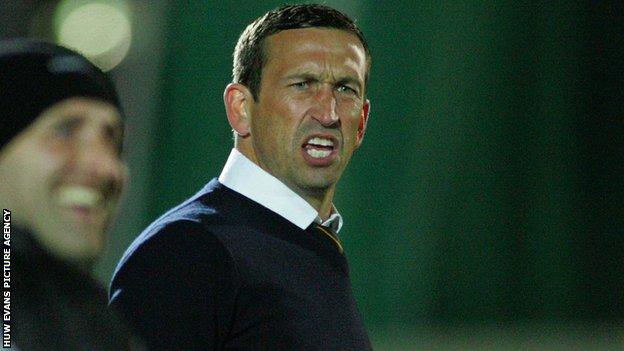 Only one side is guaranteed automatic promotion from the Conference, with the second promotion spot decided through a play-off system.

"I am really against it," said Edinburgh, whose side are fourth in the table.

"I do feel it is unjust and I think it needs to be changed. Hopefully, it won't be too long before it is."

Wrexham missed out on automatic promotion despite finishing in second with 98 points last season.

The Dragons lost their two-legged semi-finals to Luton Town, who had finished 17 points behind them in the table.

Fleetwood were promoted as champions, with York City beating Luton in the play-off final.

"I look at the league above [League Two] and they have three automatic places and one in the play-offs, " said Edinburgh, talking to BBC Radio Wales' Football Show on Monday night.

"There is a high percentage of clubs that come out of the Blue Square Premier that go to get back-to-back promotions, like Stevenage and Crawley."