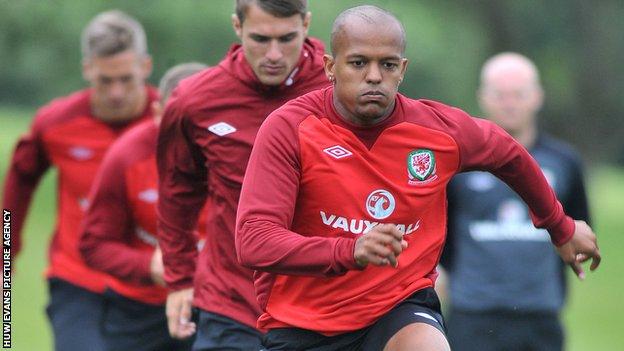 Rob Earnshaw says his move to Toronto is designed to improve his hopes of playing for Wales rather than signal the end of his international career.

The striker, 31, has joined the Major League Soccer club on a free transfer having been released by Cardiff.

He has not played for Wales since a fleeting appearance as a substitute in August but insists he still has a future with the national side.

"I love playing for Wales. I'm never going to give that up," he said.

Earnshaw made his debut for Toronto on Saturday, lasting 85 minutes before being replaced five minutes from time as his side fell to a 1-0 defeat at Vancouver Whitecaps.

That was Earnshaw's first taste of competitive action since returning to Cardiff in early January after his season-long loan to Israeli side Maccabi Tel Aviv was cut short.

He was deemed surplus to requirements by Cardiff manager Malky Mackay, who declined to select him at all this season.

On Saturday, Vancouver included former Cardiff striker Kenny Miller, who continues to play for Scotland while based in the MLS.

And Earnshaw believes his move to the north American league will improve his hopes of adding to his 59 caps for Wales.

"The reason I actually came out here was to carry on my Wales career," he said.

"I spoke with [Wales manager] Chris Coleman at the end of last year and he said 'listen, go and play games and you'll be involved'.

"So that's why I came out here - I wanted to play games. I wanted a fresh challenge as well.

"This is going to be a real, real challenge. I've not come here to take it easy. I'm going to step it up and be good and that's going to help me with Wales.

"Playing regularly and scoring is only going to be a good thing."