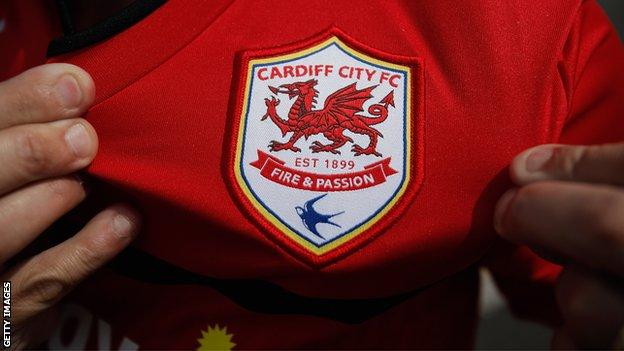 Cardiff City have said they will make no changes to the club crest "for the foreseeable future".

A statement on the club's website said the recommendation was made by owner Tan Sri Vincent Tan after "guidance" from Cardiff City's management team.

Tan insisted on a new club crest before the start of the season, placing a red dragon prominently in place of the traditional bluebird.

He also changed the club's home kit colour from blue to red.

The latest announcement from the Championship leaders comes four days after the billionaire owner released a statement to say he would not be changing the club's name.

That followed an interview with BBC Wales where Tan revealed that promotion to the Premier League could lead to a new "brand" for the club.

Tan had acknowledged that the use of the current badge would come under discussion, but the club have now confirmed there will be no redesign.

"Cardiff City Football Club can confirm that the board has agreed to retain the existing club crest for the foreseeable future, without any modifications or changes," said a club statement.

It added: "All at Cardiff City Football Club should now remain fully focussed in supporting [manager] Malky Mackay and his squad for the remaining fixtures of the season.

"We call on all supporters to continue their incredible backing, both home and away."

Cardiff, who hold an five-point lead at the top of the Championship table, host Derby County on Tuesday.