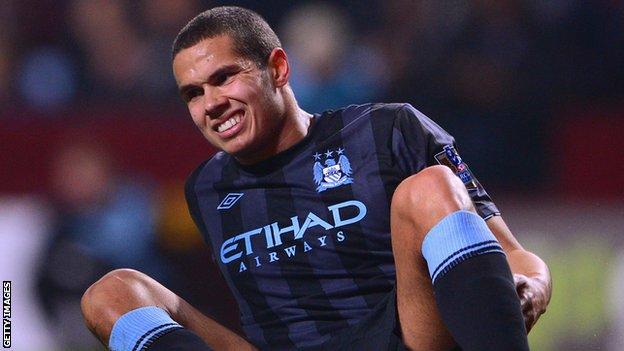 Jack Rodwell could be out for a month after a recurrence of a hamstring problem in the 1-0 win at Aston Villa, manager Roberto Mancini has said.

The 21-year-old midfielder, forced off on 25 minutes at Villa Park, has now suffered nine separate hamstring injuries in the last year.

"We are very disappointed for Jack with his hamstring," Mancini said. "Maybe he will be back in three or four weeks."

Rodwell has played only 11 times since signing from Everton in the summer.

"I think it is impossible to resolve his problem after six or seven months because he's had this problem for five or six years and we need maybe more time," Mancini added.

"I am very sorry because he is a young player. He needs to improve but he has played very well against Chelsea and was playing very well tonight."

The England international missed more than three months of action with the same complaint before he came on as a late substitute in the 1-0 FA Cup victory against Stoke on 26 January.

He had previously said the hamstring problem he had experienced since arriving at the Premier League champions was "easily the worst injury setback" of his career.

Despite Rodwell's departure, City managed to reduce the gap to leaders Manchester United to 12 points as Carlos Tevez punished a mistake from Villa defender Ciaran Clark.

Mancini said his side would probably need to win all their remaining games to stand any chance of retaining the title.

The 48-year-old said: "It is difficult because we have 30 points to play for and we need to try to win. At the end, we will see what happens. In football everything can happen right up to the last second.

"We probably need to win all 10 matches that are left. If [United] lose three or four or five games... But it is difficult, because they are too strong for this.

"When you have to win always, it is difficult to win every game. But last year we did this. Why can't we do it this year?"