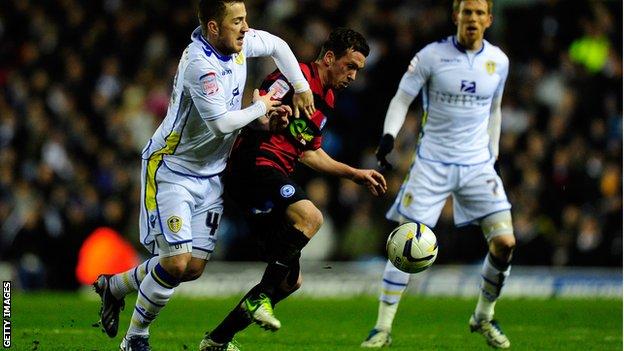 Teenager Sam Byram rescued a point for Leeds but their play-off hopes were dented as struggling Peterborough secured a crucial draw at Elland Road.

Striker Dwight Gayle, 22, had given the visitors an early lead with a rising left-foot effort, his 11th goal in 20 league appearances.

The hosts could have won it but Jason Pearce headed agonisingly wide.

Leeds are five points from the top-six but Neil Warnock's team are beginning to run out of games.

They have now drawn the last three matches, but they will be frustrated they failed to secure a first win in four games.

Peterborough, who move above Wolves in the Championship table to within two points of safety, might also have been celebrating victory had goalkeeper Paddy Kenny not denied Lee Tomlin.

They looked anything but a team in relegation trouble as Gayle rattled the bar in the 13th minute with a well-struck volley.

Leeds failed to heed the warning and Gayle created a goal out of nothing, the Posh forward skipping round defender Lee Peltier on the left edge of the area before finding Kenny's top right-hand corner in the 15th minute.

Tomlin's 25-yard effort had Kenny diving at full stretch to turn the ball away for a corner before Byram equalised in the 57th minute after connecting with Warnock's corner.

Warnock was relieved to be handed only a yellow card by referee Simon Hooper for bringing down Kane Ferdinand, who would have been clear on goal.

Then Gayle forced Kenny into a brilliant flying save to keep out a thumping right-footed drive before Pearce wasted a great chance to win it for Leeds after Paul Green's cross.

"Every game we don't win at home is a missed opportunity.

"I won't be diverted from the nine games that are left. It's going to be a rollercoaster. We'll be criticised one week and praised the next.

"It's not a good point. It's really disappointing that we dropped two points.

"It was a great opportunity to get three points and out of the last three draws I would say tonight was the biggest opportunity.

"We had seven or eight chances to get the second goal and we've not taken them."