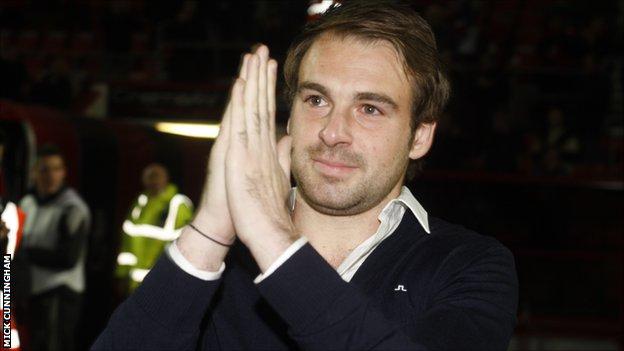 The Cherries remain seventh but move to within two points of the play-off zone.

Pitman found the net from the spot after Eunan O'Kane was brought down by keeper Steve Arnold.

Earlier Lewis Grabban fired straight at Arnold when one-on-one. Stevenage had an effort headed off the line while Darius Charles was sent off in stoppage time for a second bookable offence.

His challenge on Harry Arter saw the Cherries midfielder carried off on a stretcher as Eddie Howe's side ended a run of five straight defeats.

"It's a tough night. But I think there's a very different picture tonight.

"We've got six first-team players out and we're against a Bournemouth squad suffering with injuries but with a much bigger squad depth.

"And the game has hinged on a very, very important decision by the referee. The penalty, I thought, was unnecessary from the referee."

"I thought first half we were excellent - probably some of the best football we've played in a few weeks. Really pleased with how the lads were composed and brave and we really did move the ball on what's a difficult surface against a difficult team.

"There have been question marks about our defending in recent weeks but the lads proved a point today - I thought the back four, goalkeeper, midfield four and front two were excellent."

On the departure of former England goalkeeper David James: "David James has been excellent for us. He's been a model professional - can't speak highly enough of him.

"Unfortunately we've had to make some difficult calls, not just on the goalkeeping front. Financially we're having to re-adjust things and re-align things at the club and this is part of that, but we thank David for everything that he's done for us and we wish him well in the future."