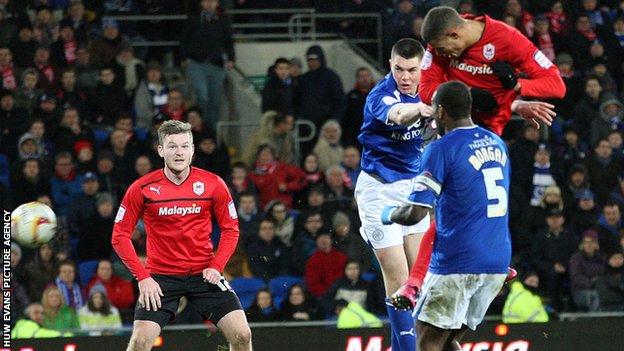 The Frenchman headed past Kasper Schmeichel in the third minute of injury time in a breathless finish at the Cardiff City stadium.

Leicester had looked set to win after Michael Keane had headed them in front 18 minutes from time.

The result lifts Cardiff four points clear at the top of the Championship table, with a game in hand over Hull.

But this was a let-off for Malky Mackay's team, who again looked nervous and out of sorts.

And when Keane, on-loan from Manchester United, struck with a close-range header it looked as though Cardiff were slipping to their third defeat in five games.

But Gestede's direct style made the difference, although it was the Foxes who looked the more assured and dangerous side with Lloyd Dyer and David Nugent posing problems for the Bluebirds' defence.

Leicester will feel a little bit disappointed. There was plenty of effort, that is for sure. I felt that the home team lacked a little bit of confidence, a little bit of composure. Leicester deserved their lead and were probably quite surprised when Cardiff pulled that goal out of the blue right in the last seconds of the game

A further worry for Cardiff was another injury to captain Mark Hudson, who was making his first start after missing two games with an ankle problem.

Cardiff goalkeeper David Marshall was tested early on when he could only parry Nugent's shot into the path of Dyer whose follow-up was blocked by Aron Gunnarsson.

And Dyer was instrumental in another promising move just before the interval with Andrew Taylor having to clear away for a corner as Leicester's top scorer Nugent closed in.

The Bluebirds appeared nervous after their recent run of poor form - their best chance in an unconvincing first-half display chance coming to nothing when Craig Noone and Fraizer Campbell got in each other's way.

Cardiff boss Mackay was clearly unimpressed with his team's attacking, sending on Craig Bellamy to replace Noone at the start of the second half.

His other change was enforced, however, with Kevin McNaughton replacing Hudson who had received treatment during the opening period.

Cardiff's greater attacking intent almost paid off when Bellamy's early ball freed Tommy Smith on the right, but his low cross was just missed by the diving Campbell.

The Foxes' reputation for finishing strongly was underlined as they surged forward and Keane headed Danny Drinkwater's corner onto the post.

The Manchester United loan man then made Cardiff pay for failing to clear their lines, heading in from close range from St Ledger's cross.

Leicester did not look troubled until the closing minutes and many home fans had already left the stadium when Gestede found the target to earn a point.

"We had a couple of chances just before that [equaliser] from [Peter] Whittingham and Fraizer Campbell, so to get the actual goal in the end is a hard-earned reward for that team tonight.

"It's about making sure that we just stay focussed on our task in hand, we've got to make sure that we only look at the team that's in front of us.

"Everyone else is in the same boat in terms of chasing, in terms of picking up points every week and knowing that wherever you go in the division there's tough games, and you saw that again tonight."

Leicester City manager Nigel Pearson said: "We deserved to win the game as we were much the better side.

"It was a bit cruel on the players bearing in mind how late it was. This is never an easy place to come to and a bit of confidence has been lacking. But I thought we played very well.

"We know that our points tally of late has not been good enough and we've fallen off the pace. I just feel for the players.

"I can't remember Cardiff really creating a chance until the goal. It was fatigue, but that happens. I'm not going to get too downbeat about it. You've got to work your way and show courage through difficult periods. The players did that."