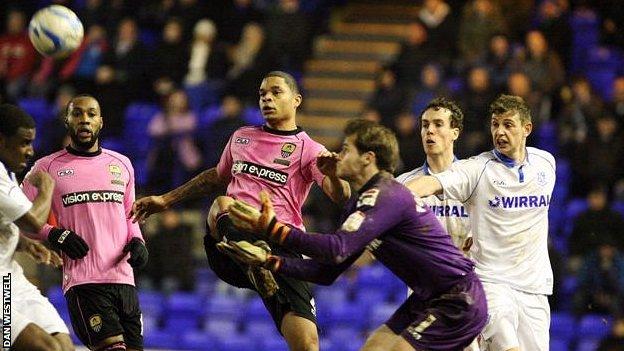 Defender Dean Leacock has revealed he had started to think about retiring before his move to Notts County.

He had a miserable spell at Leyton Orient last season, following an unhappy end to his Derby County career.

But the 28-year-old has been a regular for the Magpies this season.

Leacock told BBC Radio Nottingham: "It was hard, but maybe it was a blessing. I have had a change of heart and I looked at a few things over the summer and I'm doing alright and am happy."

I wasn't playing and I was training with the youth team. It was real difficult, but I have moved on and feel I am stronger person and a stronger player

He spent just under five years with Derby but was plagued by injuries and fell out of favour with manager Nigel Clough during the latter stages of his time at Pride Park.

And Leacock said the transfer to Leyton Orient in January last year also turned into a nightmare.

"I can't say I had a great time down there playing-wise," he continued. "I wasn't going through the best of stages football-wise, I didn't know whether my heart was still there.

"It was hard and I didn't get to see my wife and kids. I wasn't playing and I was training with the youth team. It was real difficult, but I have moved on and feel I am stronger person and a stronger player."

The former Fulham centre-half said he owed a debt of gratitude to former County boss Keith Curle, who brought him to the club last summer, but was sacked in February.

"It made me look at football and realise it's a great thing to be in - not just for money but for the fans and the buzz you get. If I am happy, I go home to the family and it makes it a lot better.

"They were tough times, but I have come out a lot better person and stronger for that."