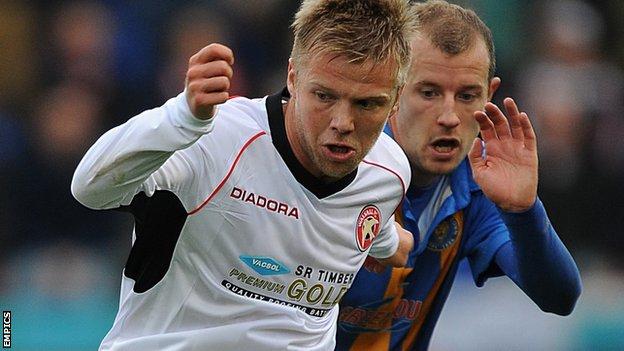 Walsall midfielder Nicky Featherstone has signed a new contract to run until the end of next season.

The 24-year-old has made 31 appearances since joining the League One club on the eve of the season following his release by Hereford United.

"This is another piece of the jigsaw in place," said Walsall boss Dean Smith.

"Nicky has performed really well for us this season. He has a great attitude, he wants to get better and has a real hunger for the game."

It's important that we keep the nucleus of this team together

Featherstone started his career with home town club Hull City, making 16 first team appearances, as well as spending two on spells with Grimsby Town before moving to Hereford in the summer of 2010.

He played 72 times for the Bulls, scoring his one career goal in a 3-1 win at Torquay in February 2011, before moving across the Midlands with Hereford teammate Ben Purkiss.

"It's important that we keep the nucleus of this team together," said Featherstone. "My game has certainly developed under the gaffer's influence and now I want to play my part in a positive end to the season. I am excited by what the future holds in store."

Walsall currently stand eighth in League One, just five points off the play-offs, after their latest six-match unbeaten run.