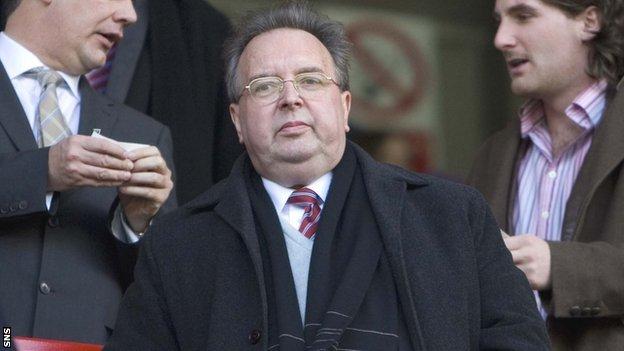 Dunfermline owner Gavin Masterton is to step down from the club's board, BBC Scotland has learned.

Dunfermline plan to use a share issue to raise up to £500,000 to keep going until the end of the season.

Masterton, 71, will leave the board after the share issue has been settled.

The former managing director of the Bank of Scotland recently said that the Fife club, whose last accounts showed them to be £8.5m in debt, are struggling with a cashflow problem.

Masterton has been stung by the criticism of fans of the First Division club, describing the "intense pressure" as "unbearable".

In a statement issued by the club, he warned: "It's quite simple, if the club cannot go ahead with the share issue, there simply will be no club - our aim is to raise £300,000 to £500,000 through the share issue which will help provide stability to the club's cashflow."

And he lamented the lack of unity between the supporters groups and the board and hoped that his resignation would have "a unifying effect".

He said: "Every group can have a potential role to play in the future of this great club and the key then is for people to sit down calmly and discuss each and every option.

"I have stated repeatedly that Dunfermline is too small a town for squabbling about the club's direction and that everyone must pull in the one direction otherwise Dunfermline risks losing a huge asset to the town and local economy.

"I have found the intense pressure that I and my family have been placed under over the last six months has become unbearable.

"As such I feel for the club to move forward it is only right that I and my family now take a step back.

"I still have a substantial investment in the club, therefore it is in my interests to see the club go from strength to strength. I do hope the club will get back to where it belongs."

Masterton told BBC Scotland last month that Dunfermline Athletic has a 30-year lease on the stadium from the company and that it pays no rent or interest on it.

The club statement added of Masterton: "He remains committed to making a proportion of his shares available for re-distribution through the DAFC Share Option and nullify part of his personal loan to the club as that still remains the only means to stabilise the club for the remainder of this season."

Club legend Jim Leishman will be tasked with bringing together fans' groups and local businesses to help stabilise the club.

Last week the Dunfermline players complained to PFA Scotland about the club's partial payment of their wages.

And on Tuesday for failing to pay Hamilton its share of gate money for the Scottish Cup tie on 2 February.