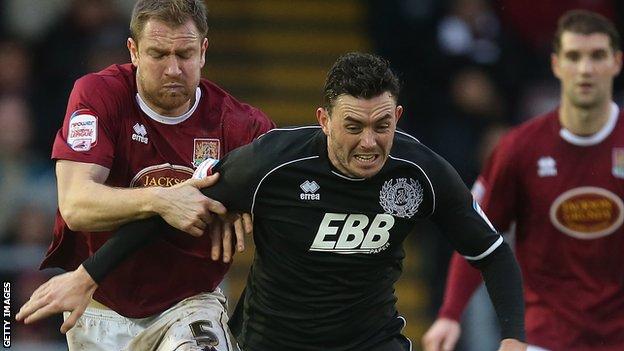 Aldershot Town striker Craig Reid has praised the impact manager Andy Scott has had since his appointment.

The Shots are unbeaten in three games following Scott's arrival and are three points above the League Two drop zone.

Reid told BBC Surrey: "He has instilled a few different ways of playing and training and I think it is showing.

"Everybody wants to impress a new manager and has probably lifted their game five or ten percent. It is making the difference."

He added: "He is a very positive person, as is Terry [Bullivant, Scott's assistant]. They have identified we are good players and it is a bit of false position we are in."

The EBB Stadium outfit are now undefeated in their last five league games and Reid expects the side to move further away from the relegation zone.

"Our performances are testament to the ways the lads have been training," the 27-year-old said.

"We have been working hard and I think there will be a lot of teams looking over their shoulders worrying about us.

"Everybody takes a lot of confidence from these results and the changing room can't be much better at the minute. We are not even looking down now - it's more who can we catch?"

It was a massive shock. It is gutting for the likes of me, who has a bit of history with the gaffer

Reid, however, admits he was slightly surprised by the departure of former manager Dean Holdsworth.

The former Wimbledon FC striker, whom Reid had previously played under at Newport County and cited as a reason for joining Aldershot last summer,was relieved of his duties last month following a win over Torquay.

"It was a massive shock," Reid said. "It is gutting for the likes of me, who has a bit of history with the gaffer.

"But the lads can't dwell on it too much as we have got a job to do at the minute. Him, of all people, will want us to do really well and get out of this position.

"He would be the first one to tell us how good we are."

Reid scored his 11th goal for the Shots in Saturday's 1-1 draw with Gillingham, and the former Stevenage man is now looking to kick on after overcoming a niggling knee injury.

"It has been a frustrating time with my injuries," he added. "It's nice to be back in the team and back amongst the goals.

"In total it has been 10 weeks I have been injured this season and that is a lot of games to miss.

"I was on a good run up until my knee injury but hopefully now I am over it. The past three weeks I have had no recurrence of the injury so it is a case of getting back match fit."