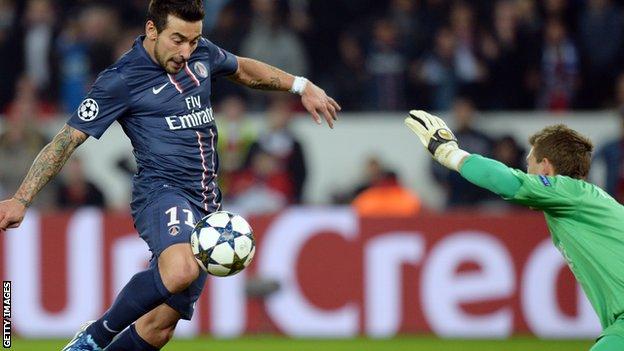 Paris St-Germain reached the quarter-finals of the Champions League for the first time in 18 years as a draw with Valencia at Parc des Princes gave them a 3-2 aggregate win.

The visitors needed at least two goals to progress, and Jonas's powerful finish gave them hope.

But Ezequiel Lavezzi equalised, firing home at the second attempt, and Valencia could not find a second.

David Beckham was an unused substitute for the French side.

Paris St-Germain manager Carlo Ancelotti has taken four different clubs into the Champions League quarter-finals (Juventus, Milan, Chelsea, PSG). Jose Mourinho is the only other coach to do so.

The former England captain has started one game and come off the bench twice since joining Carlo Ancelotti's side.

A 2-1 victory at Valencia last month gave PSG some breathing space going into this game and it was evident from the outset of the second leg that they would not be taking any unnecessary risks.

The same could not be said of Valencia, however, who knew they could not afford a cautious approach.

The Spanish side had scored in all but one of their last eight matches, but their leaky defence was of concern, conceding two goals in three of their previous four games.

The absence of PSG top scorer Zlatan Ibrahimovic would have been of huge relief for Valencia, and the French side lacked bite in attack without their talismanic striker.

Lucas Maura was tasked with filling the void left by Ibrahimovic and the Brazilian was the first to fashion a chance in the game, expertly turning Jeremy Mathieu but his shot failed to match his build-up work as he dragged it wide of the far post.

Valencia's first chance was better. A delightful one-two between Roberto Soldado and Jonas presented the former with a clear shot on goal, but his scuffed effort was straight at Salvatore Sirigu.

Chances after those two were at a premium, however, as Valencia showed plenty of endeavour but were left wanting in the final third, while the lack of a focal point for PSG's attacks was telling.

There was a brief moment of action just before the break as Sirigu was called upon to make a routine save when Jonas's well-struck shot was straight at the PSG goalkeeper.

For the first 10 minutes of the second half the game continued at the same pedestrian pace.

But a fine 55th minute finish by Jonas injected the urgency the game so desperately needed.

The Brazilian received the ball 25 yards from goal and broke towards the edge of the area before smashing a thunderous effort that proved too powerful for Sirigu.

Paris St-Germain last made it into the quarter-finals of the Champions League in 1994-95. They have won five of their last six games in the competition.

Needing one more goal to progress, Valencia set about pressing the home defence, but that left them susceptible to PSG's counter attacks.

That was almost the case when Blaise Matuidi sent Lavezzi clear just after the hour but Guaita was quick off his line to get to the ball first.

However, a touch of fortune saw the Argentine put his name on the scoresheet soon after.

Good work from substitute Kevin Gameiro put Lavezzi through on goal and though his first shot was denied by Guaita, he prodded in the rebound with his thigh.

One goal would have seen Valencia force extra time and they finished strongly, winning a succession of corners.

But the PSG defence held firm to secure the result needed to send them into the last eight.

PSG manager Carlo Ancelotti said: "We knew Valencia came to play their game and they played really well, but after we conceded the goal we did better.

"We consider it a very important result for the club and for everyone. After 18 years to reach the quarter-finals it is very important.