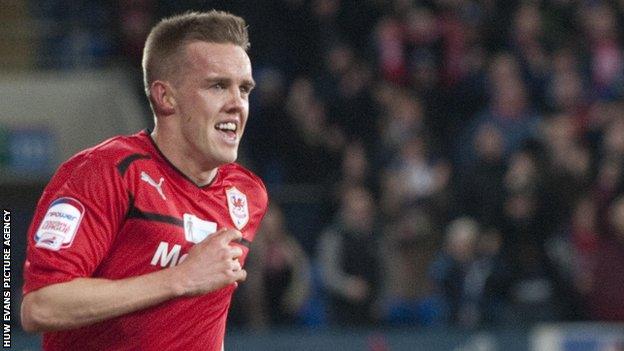 Cardiff City manager Malky Mackay has rejected suggestions his side are feeling the pressure of trying to win the Championship title.

The league leaders dropped points on Tuesday, despite fighting back to secure a 1-1 draw with Derby County.

Mackay said: "It's not always going to go the way you want it to - everyone is fighting for everything in this league.

"If there were nerves we wouldn't have come back at the end, scored the goal and nearly got the winner."

Cardiff's lead at the top of the table, which was in double figures at the beginning of February, has slowly been eroded over recent weeks by the chasing pack.

But the gap remains five points following Tuesday's round of matches after Hull lost at Crystal Palace.

Watford now occupy second place ahead of Hull after recovering from conceding an early goal to beat Sheffield Wednesday at home.

Cardiff, who have lost in the Championship play-offs in the last three seasons, were heading for a third defeat in four games as they trailed at home to Derby, whose dominance was finally rewarded with Conor Sammon's 75th-minute goal.

But Craig Noone came off the bench to energise Cardiff and he scored the equaliser eight minutes from time. Fellow substitute Rudy Gestede then wasted a chance from six yards to grab a winner.

"I've been talking to him about coming in at the back post to try to get on the end of crosses from the other side, as I have with Tommy Smith and Craig Conway on the other side.

"It was a fantastic cross and a real good quality header."

Cardiff were often guilty of conceding possession cheaply, and Mackay was disappointed with the manner in which his side fell behind.

"There were two or three individual errors that culminated in Conor Sammon scoring," he said.

"At any point if one person had done something differently they wouldn't have scored. They know that. That's disappointing because if they score a fantastic goal, you hold your hands up.

"When they score a goal you've been the architect of, then that's when I'm disappointed. That hasn't happened on many occasions this season, certainly not at this stadium."