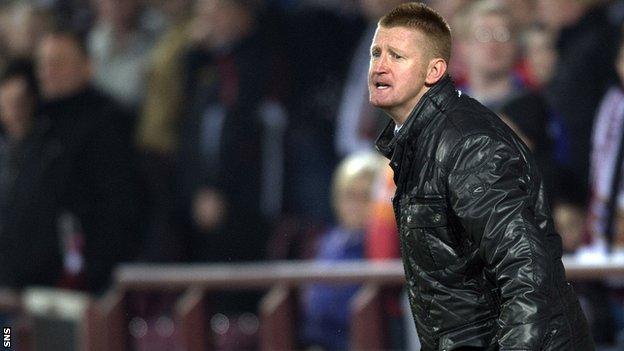 St Johnstone manager Steve Lomas felt his side were out-fought on every area of the pitch in their defeat to Hearts at Tynecastle.

A first-half strike from Ryan Stevenson was doubled by John Sutton's late goal.

"It's probably the first time since I've been here that we lost every individual battle," sais Lomas.

"When you do that, whatever formation, whatever players you put out, you come unstuck and we came unstuck tonight big-style."

Saints missed out on the chance to jump to third position in the Scottish Premier League.

Nigel Hasselbaink had a header cleared off the line by Hearts' Andy Webster and Gregory Tade's late overhead kick was disallowed for being offside.

"We let our supporters down," Lomas told BBC Radio Scotland.

"We knew it was just going to be shelled up to big [Michael] Ngoo and big [John] Sutton, and to be fair we couldn't handle them.

"But it wasn't just those two, it was all over the park."

However, Lomas still has high hopes of cementing a top-six placing before the league splits for the final five games.

"I'd say we need another two wins from three games," he said.

"It's all still to play for. We've got to take this on the chin, lick our wounds and be ready for Saturday which is another massive game for us."