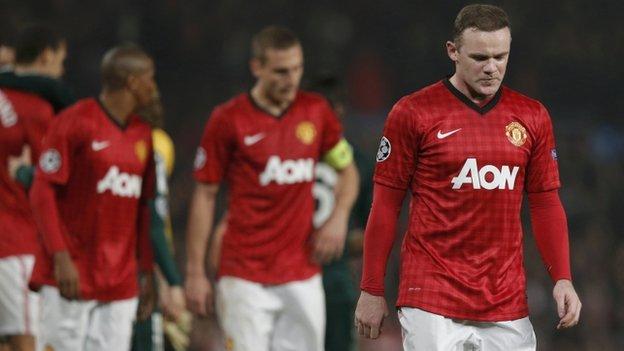 Sir Alex Ferguson was too distraught to face the media and in no fit state for a conversation with Turkish referee Cuneyt Cakir - but his body language spoke fluently in fury.

Ferguson may face Uefa sanction for his non-appearance after Manchester United's Champions League exit against Real Madrid, a fate sealed in the most contentious and frustrating of circumstances.

The Scot could, however, have been weighing up the potential for financial as well as emotional and footballing loss as there was the possibility for fines to run up faster than a taxi's meter had he revealed his true feelings about a night of pure but painful sporting theatre

United had been given a platform to build on the 1-1 draw at the Bernabeu when Sergio Ramos turned Nani's cross into his own goal early in the second half.

Nani is the fourth Manchester United player to be sent off at Old Trafford in the Champions League after Rafael Da Silva, Paul Scholes and Nicky Butt. (Opta)

It was pulled from under them when Cakir produced a red card - for Nani's high challenge on Alvaro Arbeloa in the 56th minute - which did not appear to fulfil too many of the criteria required for such punishment.

The mood was altered in a moment. Jose Mourinho, like the great opportunistic coach that he is, sensed the shift in momentum and introduced Luka Modric, who scored the equaliser while Cristiano Ronaldo finished off the job and ended United's interest in the Champions League at the last-16 stage.

Ferguson still feels United could have won more than two Champions Leagues on his long watch and every exit brings added pain as the 71-year-old strives to bring another back to Old Trafford towards the end of his career.

No words were required or offered - sad for the world's press crammed into a media theatre so high on anticipation that even standing room was spoken for - to conclude that this latest loss to Mourinho ranks alongside some of Ferguson's worst.

With the possibility of favourites and recent nemesis Barcelona going out to AC Milan and the opportunity to eliminate the dangerous Real a realistic possibility, Ferguson will know a door could have opened here. The knowledge that it has been slammed in his face with a helping hand from a perceived grave injustice will only add to his dark mood.

Mourinho's very obvious desire to be seen to be playing fair by United, a charm offensive that is almost reaching worrying proportions, led him to say the best team lost. He will find no argument from anyone of a United persuasion.

Ferguson took big decisions and made meticulous plans for Real's arrival. To see the destiny of the tie, to a very large extent, taken out of his hands by referee Cakir's decision to dismiss Nani will hurt for a very long time.

He had been bold enough to drop Wayne Rooney from his starting line-up in a landmark selection that had been rumoured but dismissed as highly implausible. How could Ferguson possibly feel he could do without Rooney for a game of this magnitude and what would it say about the striker's current place in United's order if he was dropped?

Ferguson did decide to do without him and it was a pick (or non-pick) that was proving highly successful until the red card. Manchester United are not out of the Champions League because Rooney was left out - they are out after a game-changing decision that few felt was correct.

When news of Rooney's omission was confirmed, this was the decision it was felt might define the night. Instead it was a decision of a different sort.

Nani was high and did catch Arbeloa but, as per the rulebook, it is hard to make any case that he was using "excessive force or brutality against an opponent" when excessive force means "the player has far exceeded the necessary force and is in danger of injuring his opponent".

Of course Cakir's angle could have told him differently and his instant reaction to the incident was to reach for his pocket, time afforded by Nani lying on the ground following the collision doing nothing to change his mind when the red finally appeared.

And Real may still have come back even if Nani had stayed on the field. What is beyond dispute is that it moved the balance crucially towards Real for a vital phase of the game. Old Trafford, with flamboyant encouragement from an enraged and literally hopping mad Ferguson, raised the volume but United were unnerved, unsettled and world-class players and coaches prey on opponents in those vital moments of weakness.

In that period United were bundled out of the Champions League and the quest for a fourth crown must wait another season.

Ferguson will be there to conduct it but is there a deeper sub-plot to Rooney's exclusion? An understandable debate quickly began as to whether this was the beginning of the end for him at Old Trafford.

It was not so long ago that the idea of leaving Rooney out of United's biggest game of the season, arguably their biggest since the 2011 Champions League final against Barcelona at Wembley, would have been unthinkable. The notion would have been laughed out of town.

Not any more. Not when he cannot get in the team to face Real Madrid at Old Trafford. The mantle of United's most significant striker has already passed to Robin van Persie - on Tuesday Rooney could not even make the team alongside him. It is not an indignity he usually has to suffer and not one that will sit easily with him.

It was part of Ferguson's plan for strict tactical discipline to keep Real, as much as is possible against a team of such attacking riches, under control while hitting the Spaniards on the break. Rooney clearly had no part to play in that.

Rooney himself will surely have been hurt by the decision and his reaction will be measured carefully. It was a shock to most systems to see his name among the substitutes.

He arrived on the scene too late to make any meaningful contribution and will share his manager's pain, not only at the result but his inability to influence it. Rooney-watching will be an intriguing business between now and the end of the season.

Nani's red card, United's defeat and Ferguson's post-match reaction, or lack of one, will shape the agenda for a while but when the dust settles the true significance of his decision to leave Rooney out will be analysed. There must be question marks if he is passed over for a fixture of such magnitude.

There was, and will be, a lot of pain around Old Trafford that will not be soothed by Mourinho's kind words. Ferguson's own words on the subject would have been received with relish and no doubt would have been incendiary - but they were not needed to reveal his anguish after such a bitter loss.