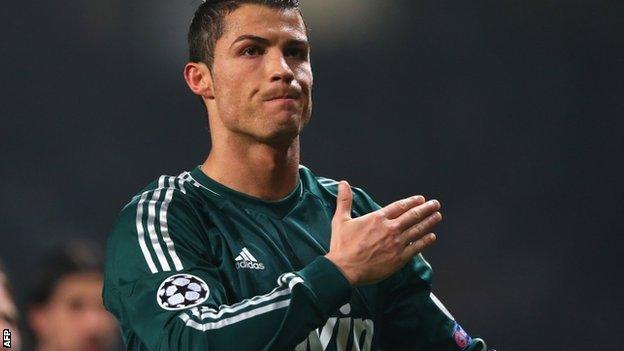 It was precisely 19:13 GMT on Tuesday when Cristiano Ronaldo stepped on to the Old Trafford turf.

He was back at the ground for the first time in nearly four years; it was 1,406 days since he was last here for a Champions League game when he wore the famous red, white and black of Manchester United.

This time he was in the unfamiliar green kit of Real Madrid for a last-16 tie against United with the score delicately poised at 1-1 after the first leg in Spain.

This was to become a bittersweet homecoming for the 28-year-old Portuguese.

Ronaldo stayed on the field warming up with his pristine red boots for 16 minutes. His task: to keep his emotions under control and focus on the job of firing nine-time winners Madrid into the Champions League quarter finals.

It was all about concentration. Ronaldo never once looked up at the vast Sir Alex Ferguson stand over his left shoulder as he practised shooting from 20 yards just to the left of centre - and finding the net every time.

Warm-ups done and it was time for team embraces. High-fives all round. Madrid's players were as one and after a few stretching routines to finish, it was time to head back for the Special One's final instructions - the final team talk from Real Madrid manager Jose Mourinho.

Ronaldo emerged again at 19:41 GMT. This time the atmosphere was hot, red hot. And at 19:44 there was a special moment as the PA announcer ran through the team line-ups. "And it's a special welcome back to number seven Cristiano Ronaldo," he boomed.

Ronaldo waved, thumped his chest, waved again. His head bowed for a respectful moment before putting his hand back on to his chest. Just for a moment, those emotions must have threatened to run away from him.

And the Manchester United support welcomed him back with a standing ovation which lasted until after referee Cuneyt Cakir started the match.

United had the better of the first half and largely managed to shackle Ronaldo.

When Sergio Ramos steered the ball into his own net to give the home side a 1-0 lead on the night, Old Trafford erupted and Ronaldo's head went down. He looked momentarily forlorn.

And then the match changed irreversibly. Nani was shown a contentious red card for a high challenge on Real defender Alvaro Arbeloa.

It was emotional, it was unbelievable. I don't have words to explain what I feel

With attack-minded midfielder Luka Modric on for right-back Arbeloa, there was much more room for Ronaldo and Real Madrid set about exposing the 10 men of United.

When Modric struck with a dipping, 25-yard equaliser, Ronaldo did not celebrate. He was far away to the left and not involved in the move. Three minutes later, he would be.

Almost inevitably, it was Ronaldo who secured Madrid's victory when he squeezed Gonzalo Higuain's cross in at the far post to silence the United fans. He held his arms half up above his head, knowing he had just broken 70,000 hearts.

Ronaldo could have added to his two goals in the two legs, but David de Gea twice denied him a fairytale hat-trick on the night.

The final whistle brought agony for United and mixed emotions for Ronaldo, who hugged Nemanja Vidic and Wayne Rooney before receiving another rapturous ovation from the United supporters near the players' tunnel.

This was Ronaldo's 18th Champions League match at Old Trafford. He has only been on the losing side once, but this victorious return ended with mixed emotions.