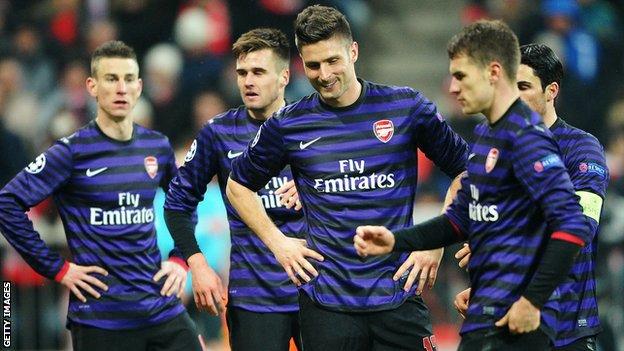 Arsenal's Champions League ambitions are over for another season, despite a gutsy away win at Bayern Munich.

Olivier Giroud converted Theo Walcott's cross in the third minute as the Gunners quickly reduced the 3-1 deficit from the first leg.

The Gunners deserve credit for a spirited performance, yet the damage was done three weeks earlier when they were ruthlessly dismantled by the Germans.

On a snowy evening in Munich, Arsene Wenger's side produced one of their most impressive European performances for some time.

But that will be of little consolation for Frenchman Wenger as the inquests begin into an eighth successive season without silverware.

A fight for a place in the Premier League's top four can be Arsenal's only realistic target for the rest of the campaign after a fine effort which left fans wondering why they are unable to produce this level of performance on a more consistent basis.

With England manager Roy Hodgson looking on, Walcott showed his class to tee-up Giroud to give Wenger's side the start their manager had demanded.

Giroud's only previous Champions League goal for the Gunners came in Germany in their 2-2 draw against Schalke in November.

And the French forward stunned runaway Bundesliga leaders Bayern after good work by Santi Cazorla allowed Walcott to deliver a low third-minute cross for Giroud to score from close range.

Wenger's celebrations were subdued, the Arsenal manager aware his side still had a mammoth task ahead of them if they were to turn the tie upside down.

There were also concerns about the Gunners defensive record after one clean sheet in seven previous games against continental opposition.

Yet goalkeeper Fabianski, starting his first senior game for 13 months, did well to keep out former Chelsea winger Robben in the 68th minute.

With his side still requiring two goals and time running out, Wenger surprisingly withdrew Walcott and sent on Gervinho as part of a double substitution which also saw Aaron Ramsey come off and Alex Oxlade-Chamberlain sent on.

"From the boardroom down Arsenal have to decide what they want to do. Yes, the club makes money, but the shareholders and the guys who run the club have to make the decision. Maybe they should have one year when they spend millions. Why wouldn't you? It's crossroads time."

Gervinho went agonisingly close to doubling his side's lead after a clever shot on the turn before Koscielny headed home from a corner to give the Gunners hope.

Arsenal, for all their endeavour, ran out of time.

At least the Gunners went on to lift the FA Cup two months later that season after overcoming Manchester United on penalties.

This season, however, just like the previous seven, the trophy cabinet is destined to remain bare.