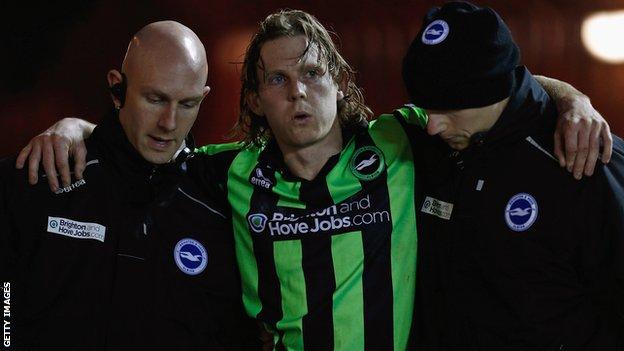 Brighton manager Gus Poyet is looking to bring in another striker with Craig Mackail-Smith likely to be ruled out for the rest of the season.

The Scotland international suffered an Achilles tendon injury in Albion's 0-0 draw at Bristol City on Tuesday.

Poyet told BBC Sussex: "It looks like it could be a serious Achilles injury. The doctor is 99.9% sure he is out for the rest of the season.

"I absolutely hate the loan market, but I won't be so naive not to use it."

The 29-year-old Scotland international joined Brighton in July 2011 after the Seagulls paid Peterborough a club record fee, believed to be £2.5 million.

And Poyet is keen to strengthen his squad to make sure their bid to make the Championship play-off stays on track.

"It changes things completely," he added.

"I like to have four strikers at least. Now we have two [in Leonardo Ulloa and Ashley Barnes] and Ash was not even on the bench [at Bristol]. Now we'll have to look for a striker."

The point at Ashton Gate kept the Seagulls in the play-off places and extended their unbeaten run to six matches and Poyet was content to accept a draw given the circumstances.

"It was one of those games that we said let's take something away, somehow," he said.

"The words at half-time were that it is not our day, nothing is going for us, we are not sharp and cannot pass the ball well - so let's make sure we do the basics.

"I won't analyse it or watch it again. It's the kind of one that you are happy with the point."