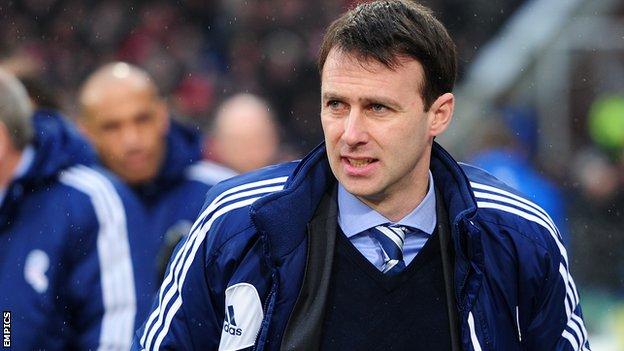 Manager Dougie Freedman fears time is against Bolton as Wanderers make a late charge for the Championship play-offs.

But Freedman was keen to play down the significance of Saturday's home game against sixth-placed Brighton.

"They're always big games. We've got a few big games coming up that I believe can keep our season alive," the Scot told BBC North West Sport.

"But games are running out quickly, which is unfortunate for us because we're finding a bit of form right now."

Four in a row for Bolton

Bolton have taken 17 points from the last 21 available, and having been 20th at the start of February, Freedman's side are now within five points of the top six.

The winger was rested by Freedman, who elected to leave out the former Burnley man after "flogging him" in training and games and not because of any loss of form.

And after admitting some of his players are feeling the effects of a first season back in the Championship and a tough training schedule, the Bolton boss has said he would like to supplement his squad with a couple of loan signings in the final weeks of the campaign.

He added: "I've not looked at the table because I know that if we can continue playing and I can get a few players in on loan to help the squad - because they are tired right now - then I know we'll climb it.

"I'm not sure how quickly we can climb it because we're running out of games, but we can certainly climb it if I can get a couple in to help the lads."