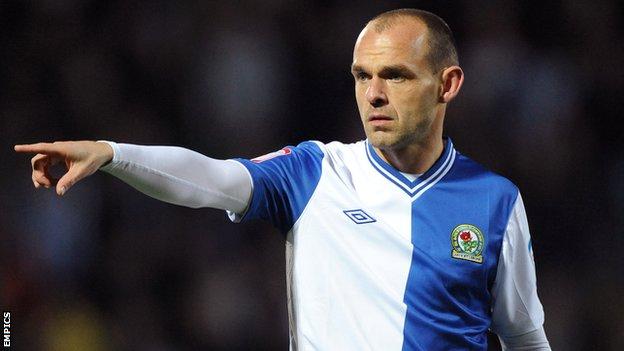 Captain Danny Murphy was left out of the Blackburn Rovers squad at Bolton on Tuesday for tactical reasons, manager Michael Appleton has confirmed.

and failed to even make the bench at the Reebok Stadium.

Appleton told BBC North West Sport: "I just felt we needed a bit more energy in the middle of the park. David Jones and Jason Lowe provided that for us."

Since beating Arsenal in the FA Cup fifth round on 16 February, Blackburn have taken just one point from five league games:

Appleton was pleased with the performance of his team, having made four changes from their tame surrender to struggling Posh three days earlier.

Murphy and another former England international, David Bentley, were left out of the starting line-up.

But the Blackburn boss has insisted that Murphy, 35, remains a key member of his squad and could return for the club's FA Cup quarter-final tie at Millwall on Sunday.

Appleton continued: "He's played for pretty much the majority of the season. Every game's different and we've got a cup tie on Sunday, which is different to the one we played on Tuesday night.

"On the back of that, we've got two Lancashire derbies against Burnley and Blackpool. He's a member of the squad and he'll be available."

Although Blackburn were unable to end their recent league slump, one positive from the evening was a first competitive appearance for Leon Best.

The striker, who cost £3m from Newcastle last summer, but came on for the final 10 minutes against Wanderers.

"I'm delighted for Leon," said Appleton, who saw his own playing career ended early because of a serious knee injury.

"He may have had an opportunity to get involved on Saturday but he had a bit of swelling and that's why he held him back.

"He got his 10 minutes on Tuesday night and, knowing Leon, he'll be banging on my door over the next few days to maybe start in what's going to be a fantastic opportunity for the players on Sunday."