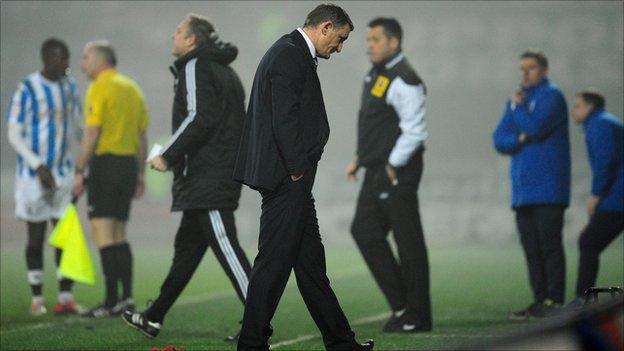 Boro lost 2-1 at the John Smith's Stadium to slip to eighth place, two points outside the play-offs having won just two league matches in 2013.

"We have to work hard and try to put it right," Mowbray told BBC Tees.

"If we can't put it right we'll have to get some players who can do a job - that's what football is."

What angered Mowbray most was the nature of the loss in West Yorkshire, as the Teessiders let slip a one-goal lead with four minutes remaining, and conceded again in injury time to suffer an eighth defeat in their last 11 Championship games.

Alan Lee's equaliser came from a set-piece - a current chink in Boro's armour after recent goals conceded against Cardiff, Millwall and Crystal Palace all resulted from balls into the box that were converted directly or not defended adequately.

"Defending a corner has become a problem for us over the last few weeks. It's been decent all season but the last six weeks it's costing us.

"It's so frustrating, five minutes to go and we're 1-0 up - we have to improve drastically. You can't win any football matches if you can't do the basics.

"Standing here having lost the match let alone drawn it is hugely disappointing."