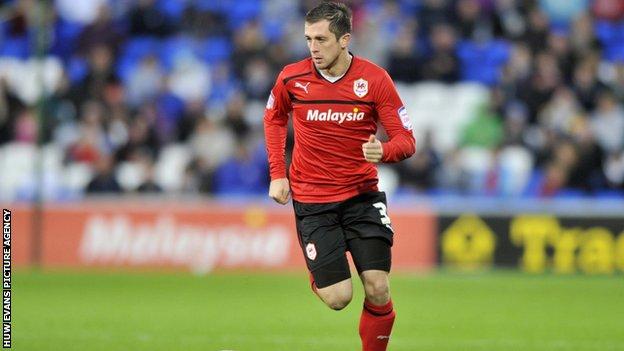 The Bluebirds scored eight minutes from time to draw 1-1 against the Rams at home on Tuesday evening, ensuring their lead at the top remains at five points.

"We were poor and lucky to get away with a point," said left-back Taylor.

"We kept going and got a point in the end which is another one on to our tally."

Substitute Craig Noone headed in Taylor's cross to avoid a third defeat in four games, having been second best to a Derby side searching for a first win in seven games.

And Taylor, 26, added: "You cannot play excellent every game and if you are going to play that badly at least we got a point out of it rather than losing.

"At times we did look nervy during the game, but I don't think as a group or individuals we are.

"We just have to focus on every game.

"Yes, we are close but there are still a lot of points to play for and if we don't approach it right, you get bitten on the backside."

Cardiff City manager Malky Mackay rejected suggestions his side are feeling the pressure in pursuit of the Championship title and promotion to the Premier League after the draw with Derby.

A few weeks ago, the Bluebirds' lead at the top was in double figures. Two wins from their last six games has allowed the chasing pack to close the gap, but the advantage remains five points after Tuesday's round of matches.

Watford leaped over beaten Hull City into second place, but Cardiff have a game in hand over them both, so too fourth-placed Crystal Palace.

"With Hull losing, they are third and six points behind us, it's all that matters," said Taylor, an England Under-21 international.

"Yes, we would like to win the league but it is our aim to just get automatic [promotion] by finishing in the top two.

"It's another game down, another point on the board and we just have to keep going and the fans are included in that because we are all in this together.

"I think at the start of the season somebody had said with 10 or 11 games to go you will be six points clear with a game in hand, everybody would have snapped your hand off."